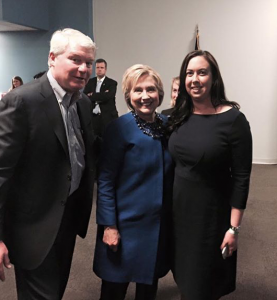 After an election that disappointed him and led to questions about his political power, the Philadelphia Building Trades head is advertising the fact that he got invited to a pre-rally sit-down with Hillary Clinton.

“Myself and about 19 other Building Trades leaders joined Mayor Kenney and Congressman Brady for a very private meeting with Secretary Clinton,” Dougherty wrote in a press release. “It was funny…we were led right past several dignitaries in line to see Hillary and they just stared at us, wondering where we were going. We were more focused on policy instead of pictures.”

“We talked with Ms. Clinton for 20 minutes about her support of Pre-Apprenticeship Programs, diversity in the workforce, and Project Labor Agreements,” he continued. “She was relaxed and approachable, so much so that she Face-Timed the young, triplet sons of Steve Petit, Business Manager of the Asbestos Workers Union, and sang them ‘Happy Birthday’. She wished me a happy birthday, as well. There also were a few selfies taken before we said our goodbyes. It was a quick but great meeting and we appreciated Secretary Clinton’s time and attention to our issues.”

This meeting took place in Mayor Kenney’s private office just prior to Clinton’s rally at City Hall on Monday night.