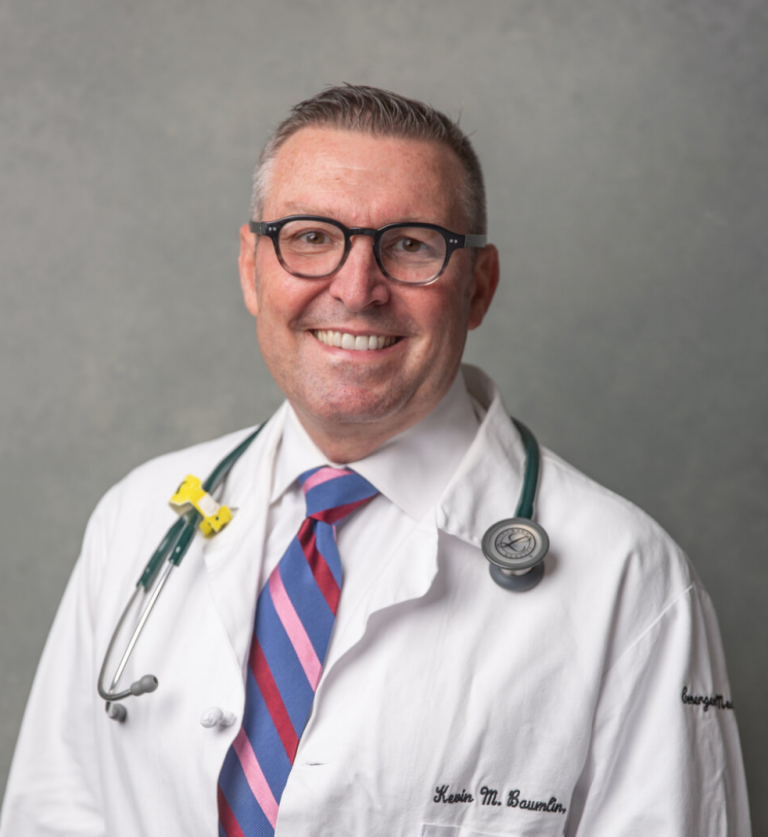 A Philadelphia doctor has joined the 2022 Democratic race for U.S. Senate.

Dr. Kevin Baumlin, the chief of emergency and urgent care services at Pennsylvania Hospital, announced his candidacy for the U.S. Senate race on Thursday.

“The challenges we face come crashing through my doors every day,” said Baumlin in a press release. “It’s not just COVID, it’s gun violence. It’s homelessness. It’s the opioid crisis.”

“My staff and I see 45,000 patients a year in the emergency department,” he continued in the release about his entrance into the race. “The problems that come through my doors have been ignored for far too long. No more.”

Baumlin, who also serves as the Chair of Emergency Medicine at Pennsylvania Hospital, released an announcement video just under 3 minutes long that highlights his experience in health care and touches on a few of his priorities that he’d address if elected to the U.S. Senate.

“I’m running for Senate because Pennsylvanians are dying,” Baumlin says in the campaign video. “For millions of families, our healthcare system has been in crisis for their entire lives–especially amongst older adults, and Black and Brown communities.”

“I want to go to Washington to address the root causes of the problems that come through my doors,” Baumlin continues later in the video. “Older adult care, lower drug prices, jobs created through infrastructure investments, affordable college education for all, affordable and accessible broadband. Free and affordable childcare to promote equity in the workplace.”

“We have to be honest about systemic racism that’s been holding Black and Brown people down for centuries,” Baumlin said.

Baumlin, who has been an emergency room doctor for nearly 30 years, also specifically talked about seeing the impact of COVID-19 first-hand in the video.

“We’ve seen 600,000 lives lost and 25,000 Pennsylvanians. These are real people who are dying,” Baumlin said. “They’re dying because of disinformation, and lack of the ability of our leaders to put people first instead of their political agenda.”

“People in power, when they don’t do things right, they kill people,” he continued.

Baumlin lives in Philadelphia with his husband, Patrick, and their boxer, Duke.

Baumlin, who is a first time candidate for federal office, has assembled a campaign team that includes multiple individuals who have worked for different campaigns across the nation. The Philadelphia Inquirer reports that Baumlin has hired Robert Dempsey, the former national states director for Bernie Sanders’ presidential campaign, as his campaign manager, Emily Wurgaft Egan, formerly of the Clinton Foundation and the Mayor’s Fund to Advance NYC, as the campaign’s finance director, Rich Schlackman, president of RMS Associates, as a senior adviser, and Steve Ayscue, who the Inquirer notes is a “longtime political operative in Pennsylvania and New Jersey,” will be doing research for the campaign.

Several Democrats have also announced their entrance into the 2022 race.

On the GOP side, Kathy Barnette, a former GOP congressional candidate and conservative commentator, Jeff Bartos, a Montgomery County real estate developer and former Lt. Governor candidate, Sean Gale, an attorney, and Everett Stern, a businessman and HSBC whistleblower, have formally announced their entrance into the race to succeed outgoing GOP Sen. Pat Toomey. Other Republicans that have filed with the FEC include John DeBellis, Bobby Jeffries, and Martin Rosenfeld.