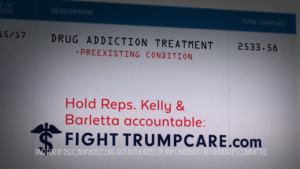 “If they decide to launch a Senate campaign, Congressmen Kelly and Barletta will be running on a platform of making older Americans pay five times more for care and stripping away coverage for pre-existing conditions — a toxic combination that has united Pennsylvanians of every political persuasion against it,” DSCC spokesman David Bergstein said in a release.

The ads feature a medical bill for drug addiction treatment with the price continually increasing for the entire length of the ad.  It moves to show a call to action to “hold Reps Kelly & Barletta Accountable: FightTrumpcare.com”

The ads use Youtube’s bumper ad format, which caps ads at six seconds, and is not skippable by the user.  Google touts these ads as “little haikus of video ads” that are perfect for mobile users.

This is the second time the DSCC has targeted both Barletta and Kelly in the same ad buy.

Barletta’s campaign defended his vote on the AHCA, while Kelly’s campaign fired back at the ads as “desparate.”

“Congressman Barletta voted for the American Health Care Act to provide every American, including individuals with pre-existing conditions and those suffering from addiction, with much needed relief from Obamacare’s failures. In fact, the AHCA ensures that individuals with pre-existing conditions cannot be denied coverage and provides $130 billion that states can use for mental health and addiction treatment,” Barletta spokesman Jon Anzur wrote in an email.

“Protecting the most vulnerable is a paramount principle of the American Health Care Act, which is one of the reasons Rep. Kelly supports it as part of keeping his promise to repeal and replace the Obamacare trainwreck. The legislation specifically provides billions of dollars to fight substance abuse, which is an extremely serious issue that should never be politicized. Rep. Kelly’s passionate commitment to helping victims of drug addiction is widely known. Any partisan ad that tries to dispute it is just plain desperate,” Kelly spokesman Tom Qualtere said in an email.

Both Barletta and Kelly have been rumored to be considering runs to challenge Senator Bob Casey next year.  State Representatives Rick Saccone (R-Allegheny) and Jim Christiana (R-Beaver), businessman Jeff Bartos, and RNC Delegate Andrew Schektor have all announced bids for Senate. Southeast businessman Paul Addis is also considering a run.

You can view the ad below: