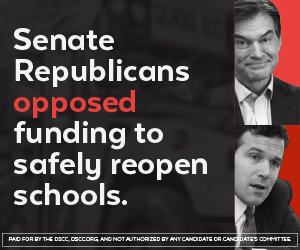 The Democratic Senatorial Campaign Committee (DSCC) took a swipe at David McCormick and Mehmet Oz today, as part of an effort to slam the Republican Party for opposing the American Rescue Plan.

The DSCC has taken out online ads across the homepage of the Delaware County (Pa.) Times website today in advance of President Biden’s address to the House Democrats at their retreat in Philadelphia.

The ads slam Republican Party senators, highlighting how the GOP opposed the American Rescue Plan (ARP) and its funding for safely reopening schools. One year ago today (March 11), Democrats in the House and Senate came together to pass ARP without a single Republican vote.

The $1.9 trillion package included $122 billion for the ARP Elementary and Secondary School Emergency Relief Fund. The funds were provided to State education agencies and school districts to help safely reopen and sustain the safe operation of schools, while also addressing the impact of the coronavirus pandemic on students.

The committee took particular aim at GOP Senate candidates McCormick and Oz, noting that Republicans are one seat away from securing the majority.

“Senate Republicans voted in lockstep against the support parents, students and teachers needed to re-open schools safely amidst the COVID pandemic – and Pennsylvanians deserve better than a GOP senator who would vote in lockstep with Mitch McConnell and against the interests of the Commonwealth’s working families,” said DSCC spokesperson Patrick Burgwinkle. “While McCormick and Oz remain totally obsessed with attacking each other, Democrats will continue focusing on working families’ most pressing priorities — like keeping our schools safe and making sure children can continue staying in the classroom.”

“Like the Wall Street bailout that David McCormick helped craft, the Democrats built a wishlist of unnecessary spending to support their liberal priorities and actually paid bureaucrats to stay home and keep kids out of school,” said Oz spokesperson Brittany Yanick. “Dr. Oz will support fiscally responsible measures in the U.S. Senate that will help create a better, stronger, more prosperous country.” The McCormick campaign did not respond to our request for comment.

In the Keystone State, ARP and the Department of Education allocated $5 billion in educational funding. The Act directed 90 percent of the state’s total allocation—about $4.5 billion – to school districts and charter schools.

Six school districts received north of $40 million, according to the PA Department of Education:

Schools were required to use at least 30% of the funding to address academic impact, lost instructional time, and support students’ mental health needs.

Democratic super PAC American Bridge 21st Century noted in a press release that McCormick, Oz, Jeff Bartos, Kathy Barnette, and Carla Sands do not support the American Rescue Plan and have openly attacked the bill, despite the fact that it improves Medicaid services for seniors and lowers the cost of child care.