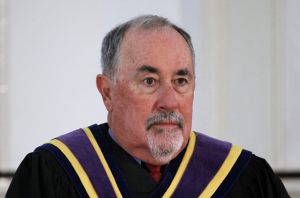 Robert Graci, Counsel to the Judicial Conduct Board, is recusing himself.

Actually, their connection went deeper than that. Graci worked on Eakin’s 2011 re-election campaign. Yet he made no mention of this when advising the Board to dismiss allegations about the Justice’s emails.

In the wake of the revelation, Graci decided to step down. His action seems to have also been precipitated by Justices Correale Stevens and Debra Todd, who didn’t know about his relationship to their colleague.

“What disturbs me is he did not disclose that relationship to me,” Justice Stevens stated. “I think that’s something I should have been told.”

“I was glad to see that, and I hope the JCB will take this opportunity to appoint an independent counsel, not simply Mr. Graci’s deputies who have been working under Mr. Graci’s direction,” Justice Todd added.

“She says it’s too bad it took exposure of his obvious conflict of interest to make Mr. Graci do the right thing,” Kane spokesman Chuck Ardo responded. “He should have done it last year.”