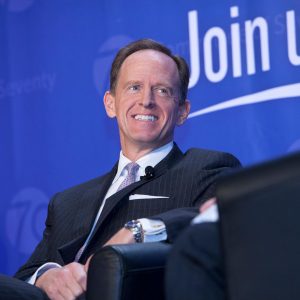 His voicemail is full, too.

Pa.’s junior Senator’s office has been flooded with calls, emails and faxes, all in an attempt to get him to oppose Betsy DeVos’ nomination for Education Secretary.

Toomey’s Republican colleagues Susan Collins of Maine and Lisa Murkowski of Alaska have announced their intent to vote no. If all 48 Democrats join them, it would create a 50-50 tie, with Vice President Mike Pence casting the deciding vote.

Toomey has said unequivocally that he intends to vote for DeVos. The Senate advanced her nomination early Friday and expected to take a final vote Monday.

“I am pleased to vote to confirm Betsy DeVos as Secretary of Education. Betsy DeVos has spent nearly three decades of her life, tens of millions of dollars, and considerable personal energy toward one noble goal: ensuring that poor children trapped in failing schools have the same opportunities that wealthy and middle class kids already have,” Toomey said in a released statement.

But Democrats think Toomey is the next most likely Republican to switch to a ‘no’ and tilt the scales. Several national publications have named him as such, including the Huffington Post.

“Toomey should understand that voting for DeVos is not in Pennsylvania’s interest, or the interests of students.  If Toomey votes for DeVos, he is putting his party and donors over people,” said Chuck Pascal, a Democratic State Committeeman from Armstrong County and a Sanders Delegate to the 2016 DNC. Pascal led the fight to move the Democratic Party’s platform in a more progressive direction on education.

Before the national call-out, but especially since, the flood increased. Local, state and national grassroots volunteers and groups have come up with many different paths to pressure Toomey.

Advocates report consistent busy signals and full voicemails at the Senator’s DC office and his offices across the state.

According to FaxZero.com, a website that allows you to send faxes for free over the internet and then tracks to faxes sent, Toomey is the most popular recipient over the last 30 days. He received almost 15,000 faxes in that time.

With the surge in people trying to keep up with the volume of calls causing lines to be dropped, Pennsylvania’s senior Senator Bob Casey’s office began having a surge of calls.  This caused Casey to start fielding phone calls himself

All hands on deck as we try to answer as many calls as possible. pic.twitter.com/FAZXjBR9lY

Some on social media even reported that Congressman Mike Doyle (D-Allegheny) is fielding calls to forward to Toomey’s office in the hopes of stopping DeVos. PoliticsPA reached out and Doyle’s staff said they are only fielding constituent calls as usual and not coordinating an opposition effort.

Toomey’s office said the staff was working to field the large number of calls coming into their offices in both D.C. and Pennsylvania, but played down the focus on DeVos.

“Senator Toomey’s staff in both Pennsylvania and Washington are taking an ‘all hands on deck’ approach in answering as many calls and emails as possible while also attending to other responsibilities, such as helping veterans, seniors, and attending to legislative concerns,” a spokesperson said in an email.

The efforts to get Senator Toomey do not stop with the protests and calls.  A Philadelphia teacher has started a gofundme page to ‘buy’ Toomey’s vote in the DeVos nomination.  The page raised almost $40,000 of its $55,800 goal – a number determined by past campaign contributions by DeVos and associates to Toomey.

DeVos isn’t the only subject spurring activists to target Toomey.

His offices have been the focus of regular protests called “Tuesdays with Toomey,” where demonstrators gather outside of his district offices on him to stand up to President Trump’s agenda.