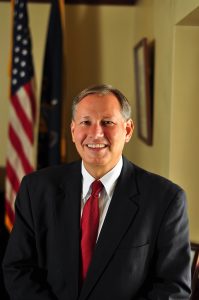 State Senator John Eichelberger faces strong blowback after comments on the state of education in the “inner city. State Senator Vincent Hughes and the Pa. Democratic Party have both described the comments as racist.

“They’re pushing them toward college and they’re dropping out.  They fall back and don’t succeed, whereas if there was a less intensive track, they would,” Eichelberger said in a town hall meeting.

Senator Hughes took to Twitter after the article was posted, classifying the comments as racist and questioning Eichelberger’s education policy.

Eichelberger says his remarks were taken out of context, and he was talking about the poor education students receive.

“They are [dropping out of college] because of their academic background.  They aren’t because they’re black. It doesn’t matter what the color of their skin is. It matters that they had 12 years of very poor school,” Eichelberger said in an interview with the Inquirer and Post-Gazette.

Pennsylvania Democratic Party Chairman Marcel Groen agreed with Hughes that the comments were racist. Groen then tried to stick the controversy on state Senator – and gubernatorial hopeful – Scott Wagner (R-York), calling on him to use his influence to get Eichelberger removed as Chair of the Senate Education Committee.

“Senator Wagner counts Eichelberger as one of his closest allies in Harrisburg, and these racist comments are shameful. We can’t have people leading our state’s education policy who believe minority students do not deserve the same opportunities and tools to succeed as everyone else.”

Hughes supports the call from the Party to have Eichelberger removed as Chair.

“I support that a thousand percent,” Hughes said in an interview with PoliticsPA.

Groen called on Wagner to use his influence to force Senate Majority Leader Jake Corman (R-Centre) to remove Eichelberger as Chair.

“The Majority Leader’s office has nothing to do with committee chairs. That responsibility falls to the president pro tempore,” Corman spokesperson Jenn Kocher said in an email.

“Senator Corman does not see any reason remove. Instead of outrage, let’s have an open and honest conversation about the needs of all students and the value of vocational education,” Kocher continued.