Eight Lessons from the 2016 Election

Going into Election Day 2016, there was little doubt that Donald Trump would do well in blue-collar, economically struggling, southwestern Pennsylvania. But even veteran politicos here were surprised by just how well Trump did.

Consider Joseph DiSarro, a Republican Party official and political scientist at Washington & Jefferson College. A fellow Republican had asked DiSarro if he would volunteer on Election Day at the polling place in Prosperity, a tiny, unincorporated township in Washington County. DiSarro packed up some party literature and drove out there.

When he arrived, he found the polls swelling with voters. It took only 40 minutes before he ran out of literature.

“I couldn’t keep up with people,” DiSarro recalled in an interview at his office in Washington, Pa. “These were hard-working people who repaired machinery or worked on a farm. I was the only one with a suit on.”

The article focuses on five increasingly Republican-leaning counties in southwestern Pennsylvania (Beaver, Fayette, Greene, Washington and Westmoreland) and, to a lesser extent, Allegheny County, which has remained resolutely blue due to a more urban population of Pittsburgh.

1. How badly have Democratic prospects deteriorated in presidential voting in southwestern Pennsylvania?

Observers in the region – Republicans and Democrats alike – acknowledge being surprised that Trump ended up winning Pennsylvania as a whole. (Trump beat Hillary Clinton in Pennsylvania by fewer than 70,000 votes, making it one of the crucial flipped states Trump needed to secure an Electoral College majority.)

However, no one here was surprised that Trump improved on how Mitt Romney performed in the 2012 election.

“When I drove through rural areas in Westmoreland County, it was wall-to-wall Trump signs,” said Marty Marks, a senior communications consultant for the AFL-CIO and Democratic campaigns. 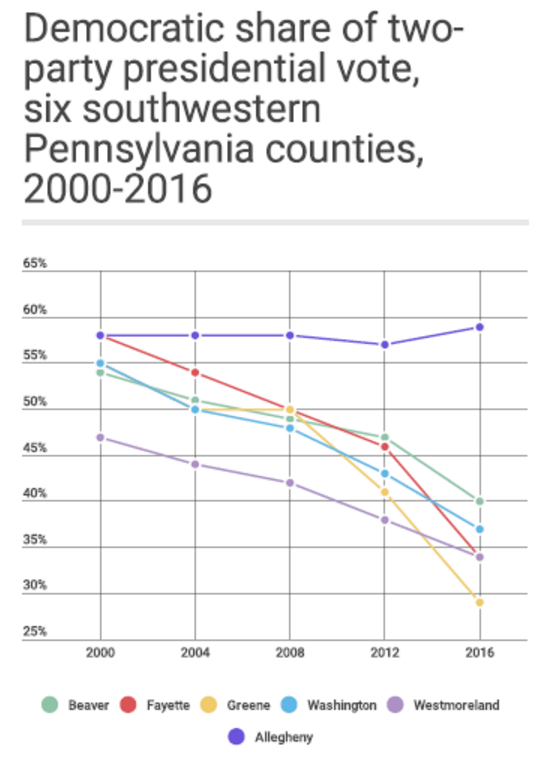 Meanwhile, the number of raw Republican votes in the six counties has risen in each election since 2000. The collective total GOP presidential vote in the six counties has increased by 51 percent since 2000, and by 14 percent over the 2012 level alone. Between 2012 and 2016, the GOP’s improvement in presidential votes – 32,279 – accounted for nearly half of Trump’s statewide margin over Clinton. 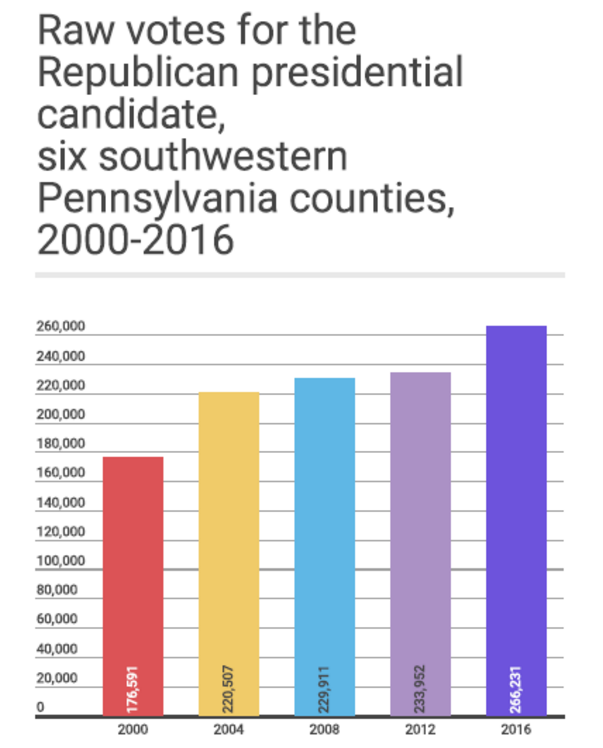 2. Are there any signs of life for Democrats in the region further down the ballot?

Hope is largely gone, but not entirely lost.

There are two ways to look at this.

On the one hand, Democratic prospects for state legislative seats in the region have deteriorated in recent election cycles.

One bright spot for Democrats was Pam Snyder, the incumbent in the 50th House district, which includes portions of Fayette, Green and Washington counties. Despite the Trump wave in her district, Snyder prevailed, 53 percent-47 percent, against Republican challenger Betsy Rohanna McClure.

Republicans “threw everything they had at Snyder, and she did not go negative,” said Kirk Holman, a longtime political observer and onetime Republican official in California, Pa. “She was everywhere and she won.”

There’s another way to look at it, and it’s more favorable to the Democrats. Democrats on the statewide ballot whose names were not “Hillary Clinton” did substantially better than Clinton did in southwestern Pennsylvania, as the following chart shows.

Senate candidate Katie McGinty lost statewide, but she did 4.12 percentage points better than Clinton did in Beaver, Fayette, Greene, Washington and Westmoreland counties.

Other Democratic candidates did even better in the region.

Torsella and DePasquale actually won Beaver County, and they came close in a few of the other counties. 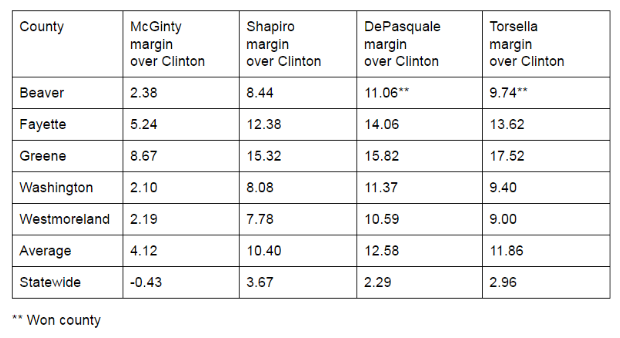 “Trump was a unique candidate, and Clinton was unique with her issues,” said Mike Mikus, a longtime Democratic strategist based in southwestern Pennsylvania, most recently for McGinty. “It was a perfect storm where people wanted an outsider.”

3. What factors pushed Trump to unprecedented success in the region?

Trump owes his strong showing in the region to a combination of substance and style, observers here said.

Trump’s focus on economic issues clearly touched a nerve. Coal miners in the region “know people in Houston and Detroit, and they talked, and in the end, the Trump movement was born,” said DiSarro, the GOP official. “It had its genesis from economic dissatisfaction.”

By contrast, DiSarro said, Clinton’s warnings about Trump’s potential for a dangerous foreign policy fell flat here. DiSarro said he’s met people who have advanced degrees but have been working at Starbucks for more than a year.

“Voters here were concerned with whether they can make a reasonable living, and whether their children will have opportunities,” he said. “He projected an image of change with respect to the status quo in our economic system.”

“He was like a cheerleader at a pep rally,” said Lawrence Maggi, a Democratic commissioner in Washington County and former congressional candidate. “He made people feel good.”

Jon Delano, the money and politics editor for KDKA-TV in Pittsburgh, said he sensed this at every Trump rally he attended in the region.

“His supporters were passionate, they clearly disliked (President Barack) Obama and wanted change, and they felt they had been ridiculed and saw their concerns ignored,” Delano said.

Trump, DiSarro said, “was at least giving hope. Clinton didn’t give any hope.”

4. What difficult lessons can Democrats learn from the results?

We heard at least three lessons.

The first was Clinton’s lack of emphasis on energy development, which proved to be deadly in southwestern Pennsylvania.

“The biggest economic driver here is energy development,” said Mike Butler, a veteran Democratic strategist in the region who is executive director of the Consumer Energy Alliance-Mid Atlantic. “A large part of the Democratic Party seemed hostile to it. How do we get back those voters? We’re not talking to them.”

Mike Ward, a GOP strategist in southwestern Pennsylvania, added that it will be tough for Democrats, since many Democrats statewide and nationally favor environmental restrictions rather than expanding fracking and coal mining.

The problem, he said, is that “you can’t win Appalachia without being pro-gas and pro-coal. You can’t.”

“Inequality means pitting neighbor against neighbor, and I don’t think people here necessarily care if their neighbor is doing well,” Butler said. “But stagnation means being stuck in a rut. That’s a wrinkle that the Democrats missed in mid-America.”

Third, observers here said, the Clinton campaign tended to tailor their message to a range of constituencies – whether that’s women, the LGBT community or millennials. What the party lacked, they said, was an all-inclusive message that could motivate and unite everyone.

“The white working class didn’t hear a message about itself,” said Chris Petrone, legislative director of Operating Engineers Local 66 in Pittsburgh. “You may love your wife, but if you don’t tell her that, she’ll start to wonder.”

5. How much of Trump’s strength in the region stemmed from Obama voters who switched to Trump, as opposed to voters who hadn’t voted in recent elections coming out of the woodwork to back Trump?

This is a tricky one to answer.

On the other hand, there’s powerful anecdotal evidence – such as DiSarro’s experience in Prosperity – to suggest a significant role for Trump’s ability to draw infrequent voters to the polls.

Ward, the Republican strategist, echoed DiSarro’s experience. He said he often works at his local polling place on election days, but standing in line this year, “I hardly recognized half the people. Usually it’s, ‘Hey Joe, how’s the wife?’ This year, I was looking up and down line and saying to myself, ‘Who are they?’”

6. How divided were labor unions in the presidential contest?

Nationally, Trump did much better with union voters than Romney did in 2012. Specifically, Clinton beat Trump among voters in union households by an eight-point margin, compared to Obama’s 18-point margin over Romney in 2012.

Union voting data is not available for the five southwestern Pennsylvania counties where Trump did especially well. However, observers here said that Trump probably won a significantly bigger share of the union vote in the region, since southwestern Pennsylvania outside of Pittsburgh and environs is overwhelmingly white, and minority union voters are widely believed to have voted more heavily for Clinton than union voters as a whole.

Marks, the AFL-CIO strategist, said it’s typical for Democrats to lose 30 percent of union voters off the top on social issues alone.

Petrone said that guns were a big issue for southwestern Pennsylvania union voters, but he didn’t sense that the Second Amendment played a bigger than normal role in 2016 than in past election cycles.

7. Would Bernie Sanders have done any better than Clinton in southwestern Pennsylvania?

The verdict here among experts was unanimous: No.

8. Finally, can Trump expect his supporters to stay with him through thick and thin, or will many of his voters turn against him if he doesn’t deliver on his promises?

Going forward, this is perhaps the most important question for the Trump Administration. But in southwestern Pennsylvania, it’s not at all clear what the answer is.

“There were fervent Trump supporters in the region, but many others who weren’t thrilled with their choices at the presidential level and who took a gamble on putting a finger in the eye of the establishment,” said Wrabley of the University of Pittsburgh-Johnstown.

DiSarro agreed. “I don’t believe this was an ideological movement – it was a pragmatic movement based on the economic situation,” he said. The region’s economic stagnation is profound, he added. “The solutions are not going to be that easy,” DiSarro said.

Trump could hurt his own standing if he gives in to traditional conservative orthodoxy by cutting or restructuring Medicare and Social Security. “We still have a very old population,” Butler said.

The best-case scenario for Trump may be to frame the changes he is able to make and tout them as a needed change of direction. “I think if he gets some low-hanging fruit, that will satisfy some of the people who voted for him,” said Maggi, the Democratic commissioner in Washington County.

At least there’s one thing everyone can agree on. “This was a very strange election,” DiSarro said. “We’ll be studying it for years to come.”