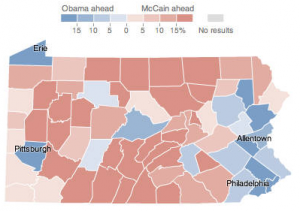 The silence is deafening.

So far Democratic state legislators have denounced a plan to chop up Pennsylvania’s electoral votes and a handful of prominent Republicans have joined them.

Many more have declined to take a stance on the controversial issue.

The plan, proposed by Senate Majority Leader Dominic Peleggi (R-Delaware), would change PA from its current winner-take-all system to one in which electoral votes would be allocated by district.  Governor Tom Corbett reiterated his support of the idea on Saturday morning.

In southeast PA, where Republicans could expect tougher re-election campaigns under this plan, lawmakers are on the fence.

Republican State Senator Edwin Erickson (R-Delaware) is also unsure if the proposed changes to the electoral plan are the way to go.

“I have no firm opinion at this point.  I think it’s fascinating but I think we need to continue that discussion,” said Erickson.

Erickson admitted he has “no idea as to what will happen” and he reiterated that “we need to wait and see and consider all of the options.”

Erickson has not heard from his many of his constituents yet about their opinions of the possible changes, reporting that “most people who have said anything are those that have a stake in this whole issue.”

State Rep. Todd Stephens (R-Montgomery) told the Glenside News Globe Times Chronicle that he also needs to mull over the plan before making a decision for or against it.

“I think it’s intriguing and worth a closer look, but I’m not committed either way until I hear more information,” Stephens said. Noting concerns voiced by some congressional Republicans, he said he’d “like to hear from them,” and also see how it’s working in Nebraska.

“I think it’s important to make sure every Pennsylvanian’s vote is counted accurately and appropriately,” Stephens said.

PA Rep. Nick Miccarelli (R-Delaware) said he would vote for the plan, but doesn’t see a strong political advantage or disadvantage for southeast PA Republicans.

He represents one of the biggest “ticket-splitting” districts in PA. In 2008 the 162nd district went for Obama, however he was still able to win by 57 percent. He is confident voters will “pick the one they want.”

“I kind of have mixed emotions about it. I honestly think that as long as we get a good nominee we’re going to win PA anyway,” he said. “It could end up costing us a couple votes but on the whole in the past couple swing elections I guess it would have helped Pennsylvania.”

Indeed he says the heightened attention could be positive for the area.

“I do think those swing areas will be more targeted by those candidates.  That being the Southeast where more than 40% of those voters are cast and those are the swing areas so if it turns out to be that we get more attention from the national candidates from that, then I think that’s a good thing.”

“I want to reserve judgement until I see the bill itself, but from what I’ve heard it’s a real simple bill,” said Knowles.

Republicans legislators might be very focused on the electoral plan, but according to Knowles his constituents are not.  Since the plan was announced last week, Knowles reported hearing from only 4 of his constituents.

“It doesn’t appear to me the number one issue of the people I represent,” said Knowles.

According to Sen. Daylin Leach (D-Montgomery/Delaware), the proposal is yet to be endorsed by national and Republican leaders, other than former Senator Rick Santorum, and and the Republican congressional delegation, “doesn’t like it.”

“I’m increasingly optimistic that we will be able to stop it,” Leach said.

The Pennsylvania Democrats also released a statement today with a list of Lancaster Republicans that have come out in opposition of the proposal, including Reps. Bryan Cutler, Scott Boyd, Ryan Aument, and Gordon Denlinger. Kate Harper (R-Montgomery) has also spoken out against it.

“I think it will make Pennsylvania less relevant.  We’re a big state.  I don’t see any reason to make changes in the rules,” said Harper.

According to a helpful whip count kept by Keep PA Relevant, a start-up group whose founder and organizer is anonymous, Rep. Scott Perry (R-York), and Rep. Will Tallmam (R-Adams/York) also oppose the proposal.

Keegan Gibson and Greta Fenzl contributed to this report.