The Natural Resources Defense Council has a launched a hundred thousand dollar media attack on Congressmen Lou Barletta (R-Luzerne) and Tim Holden (D-Schuylkill) for their affiliation with “polluters.”

The TV spots, which shows images of children swimming underwater and with masks on, will appear in the Harrisburg and Wilkes Barre/Scranton areas starting today. A spokesperson said the group plans to spend hundreds of thousands of dollars to air the ads over the next two weeks. 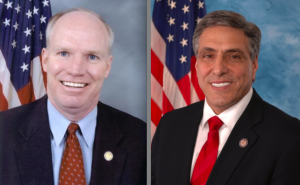 The NRDC’s bipartisan attack comes directly after both congressmen voted for the TRAIN Act, a piece of legislation that, according to the Washington Post, would delay compliance to certain Clean Air Act regulations that limit the discharge of acid gases and toxins from coal- and oil-fired power plants.

Holden told PoliticsPA that he did not vote to repeal any existing any anti-pollution regulations but rather to slow them down in an economy that’s recovering.

“We’re not out of the woods yet and we don’t want to do anything to hurt jobs.”

Team Barletta maintains that the accusations are way off of the mark.

“Claims that Rep. Barletta is ‘attacking’ the Clean Air Act are completely false. Not one of the roll call votes cited (#86, #140, #147, and #741) alters the Clean Air Act in any way. Every single vote cited keeps current EPA regulations in place and allows the EPA to continue to regulate pollutants. The roll call votes in question do not weaken or remove any EPA regulation currently in effect,” spokesman Shawn Kelly said.

Arguing his vote was meant to further study Clean Air Act regulations, Holden said he does not deserve the NRDC’s pointed attack.

“I mean, if they would have said ‘Holden represents the … coal fields and he votes for coal,’ I deserve that. But I don’t deserve to have pictures of children, innocent children, with masks on like we’re hurting their health.”

“It’s is just outrageous and, to tell the truth, insulting … over the years, I earmarked $37 million for the Penn State Milton Hershey Cancer Institute. I care deeply about my constituents and their health.”

Explaining why their group chose to come out against these two congressmen, NRDC President Frances Beinecke wrote, “Representatives Lou Barletta and Tim Holden put polluters before Pennsylvania families and endangered kids’ health by voting against common sense clean air safeguards that would curb harmful air pollution. Barletta’s and Holden’s constituents should know that their elected representatives are siding with greedy polluters who would increase the amount of dangerous toxic pollution in our air.”

Holden has raised more than $340,000 in campaign contributions from groups that the NRDC has declared to be “polluters.”

Kelly said, “This is a horrible attack ad that attempts to mislead and scare voters by making false claims about the health of children. It’s repugnant. These roll call votes will save thousands of jobs of people who work in the American cement industry. Votes against these bills are votes to kill at least 20 percent of the American cement industry, and to move more American manufacturing jobs to countries like China.”

The ads produced by the NRDC are in alliance with other environmental activist groups including Sierra Club and the League of Conservation Voters.

“During 2011 alone, Representative Holden has supported four separate measures whose combined effects are to undo key clean air safeguards that could prevent tens of thousands of early deaths and asthma attacks due to air pollution, as well as to permanently weaken the Clean Air Act and the EPA’s ability to implement it,” argued Altman.

“Just like his colleague Tim Holden, Representative Barletta has voted repeatedly during just 2011 to block clean air safeguards and weaken both the law and the agency responsible for holding polluters accountable,” he added.

He pointed to their votes in favor of the TRAIN Act, a bill to block pollution limits for cement manufacturing, and a bill to prevent the EPA from updating clean air standards.

Sari Heidenreich and Keegan Gibson contributed to this report.

Here is the full transcript of the ads:

For millions of asthmatic children, any day can feel like trying to breathe underwater.

Yet Congressman [Holden/Barletta] voted to let polluters dump mercury, soot, smog and arsenic into the air.

Toxic pollution that causes thousands of hospital visits, asthma-related illnesses and even deaths.

And if you think [Holden/Barletta] is going to stop protecting polluters on his own, well….don’t hold your breath.