Tim Holden has another headache coming his way. The League of Conservation Voters is preparing a $230,000 ad buy against the embattled Congressman. The incumbent is already being outspent by opponent Matt Cartwright and Super PACs. 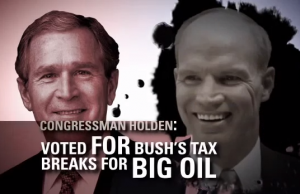 The ad will run on broadcast and cable, and the buy is large enough to saturate (and oversaturate) the Scranton/Wilkes-Barre market for the next week.

“On Tuesday, say no to Bush’s big oil energy policies, and say no to Tim Holden,” the ad concludes.

The ad buy was first reported by The Fix.

It’s a blow to Holden’s chances and a gift to Cartwright, who, unlike most challengers, can focus all of his resources on positively defining himself.

Holden has raised over $900,000 so far this cycle, and he’ll likely end the day closer to $1 million. But he’s campaigning in a district that’s 80 percent new to him.

Cartwright is fairly well known in the district already, due to his prominence as a local, Lackawanna County attorney. He raised over $300,000 so far and contributed $380,000 of his own money.

It’s not the first time Holden has earned the ire – or the media dollars – of environmental groups. In October, the political arm of the Natural Resources Defense Council spent $100K to air TV ads knocking Holden, as well as Rep. Lou Barletta (R-Luzerne) over the Clean Air Act.

In a release announcing the buy, the LCV said, “Holden’s lifetime LCV score of 57 percent gives him the 6th worst environmental voting record among current Democrats in the House.”