By Keegan Gibson and Jared Edgerton

Political momentum to pass more stringent regulation on Marcellus shale drilling appears to be reaching a critical juncture. Today will see a two-pronged effort by several Pennsylvania environmental advocacy groups: a large rally in the Capitol at noon, and a similarly large effort inside as over 300 constituents are scheduled to meet with representatives during a Marcellus “Lobby Day.” 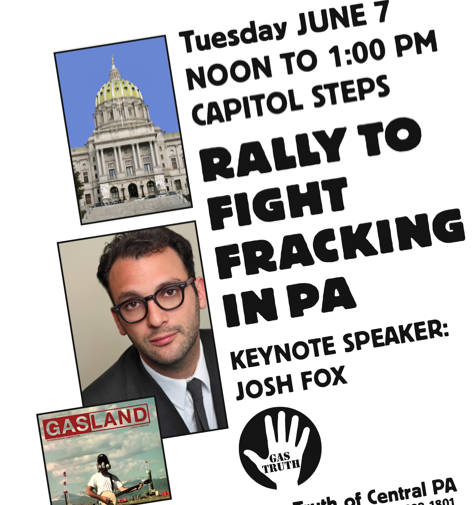 Josh Fox, the filmmaker behind the Oscar-nominated documentary ‘Gasland,’ will be a featured speaker.

The stated goals (pdf) of Tuesday’s rally are:

1)      Have a moratorium on drilling, until there is a “cumulative impact study”
2)      Provide protection for drinking water and rivers
3)      Hold drillers accountable, including them paying a “fair share” of taxes
4)      Require full disclosure of hazardous chemicals used
5)      Protect the State Forests

Travis Windle, a spokesman from the Marcellus Shale Coalition, says his group supports having a robust conversation about Marcellus. He contends that today’s rally is a farce.

“For all intents and purposes, though, today’s charade will not be grounded in facts or science, but rather focused on hyperbole and scare tactics with an aim of grabbing headlines.”

Industry folks and their allies in Harrisburg have noted that much of the clamor for new laws comes from parts of the state outside the areas directly impacted by Marcellus drilling. Today, for example, environmentalists have chartered three buses from Philadelphia and southeast PA.

Windle called Fox a propagandist, quoting John Hanger, the founder of PennFuture (an environmentalist group) and the former Pennsylvania Environmental Secretary during the Rendell administration.

The Marcellus Shale Coalition also points to its positive track record in creating jobs in Pennsylvania, 48,000 in the last 18 months according to several reports.

The primary goal of their face-to-face lobbying with legislators is a bit more nuanced. Insiders point to a recent decision by the Department of Environmental Protection to endorse changes to the Oil and Gas Act as progress that Harrisburg has warmed to stronger environmental regulations on hydraulic fracturing, aka “fracking.”

Less controversial than a severance tax, let alone a moratorium, proponents argue that these reforms would enjoy bipartisan support – if they are given a hearing.

“The Governor’s own DEP has called for serious changes to this [Oil and Gas] Act, things that echo what we’ve been calling for for years,” said one environmental advocate. “With so many accidents recently, the argument that there has never been a fracking-related contamination of drinking water,” (as Lt. Gov. Jim Cawley said recently), “just isn’t holding sway any more.”

A quick side note: the point about water contamination may or may not be fair, depending on where you sit. Cawley’s comments referred to the fact that there are no definitive cases of hydraulic fracturing chemicals migrating from the deep layers of Marcellus shale into an aquifer – a frequent contention of anti-Marcellus protesters. However, environmentalists now argue that surface spills – like the recent one in Bradford County – have gotten into streams and rivers and thus have polluted water that way.

Nonetheless, says the environmentalist, “If these new safety rules are given a fair hearing, they’ll pass. It would be a political headache for anyone – especially lawmakers in the Marcellus region – to oppose them.”

The lobbying push is expected to involve over 350 attendees, making it the largest such effort any environmentalists (that PoliticsPA spoke to) can remember.