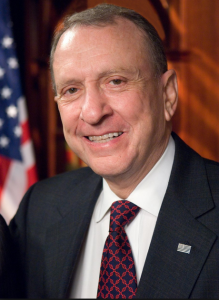 If you’re a fan of the NFL, you’ve probably heard of the new revelatory piece from ESPN Magazine.

In short, the story by Don Vatta Jr. and Seth Wickersham (which is well worth the read if you have the time) reveals that Deflategate was more or less an effort by NFL Commissioner Roger Goodell to get back in the good graces of league owners after they felt he went easy on the New England Patriots during the Spygate scandal.

Their piece reveals tons of previously secret information regarding that particular scandal and the efforts the late Senator Arlen Specter went to in order to wring justice from the mess.

Specter, at the time the Ranking Member of the Senate Judiciary Committee, was finally able to secure a meeting with NFL Commissioner Roger Goodell after he threatened to introduce legislation that would eliminate the league’s antitrust exemption.

The NFL seemed to think Specter’s inquiry was motivated by Philly cable giant Comcast, who were locked in a dispute with the league over what cable fees to charge for carrying the NFL Network.

The Senator always denied this and it is much more likely that the former prosecutor was drawn to the case by an affinity towards investigations and a concern for constituents (primarily Eagles and Steelers fans).

In their 100-minute interview, Goodell revealed for the first time that the Patriots taping of coaches’ signals during games began in 2000 when Bill Belichick took over as head coach, not in 2006 as Goodell had previously publicly stated.

In notes that Specter took during the meeting he underlined Eagles and Steelers underneath “Signals to QB”. Next to Steelers, Specter wrote four dates, which were the days the Patriots and Steelers played against each other from 2002 to 2005 (New England won three of the four contests, two of which were AFC Championship Games).

A committee counsel noted that Goodell was “defensive” and had the “overtone of something to hide”. The Senator was particularly concerned whether New England had spied on the Eagles ahead of Super Bowl XXXIX.

At the bottom of his notes Specter wrote, “No valid reason to destroy”, referring to the destruction of the Patriots tapes and notes by the NFL.

In his 2012 book “Life Among the Cannibals”, Specter wrote that a powerful friend urged him to lay off the Patriots as their could be a reward in the form of campaign cash.

Instead Specter decided to interview Matt Walsh, the man in charge of this operation for New England from 2001 to 2003.

Walsh told the Senator that the Patriots film crew did witness the St. Louis Rams’ walk-through before Super Bowl XXXVI and that while it was not premeditated they did witness plays that aided the Patriots during the game.

Afterwards, Specter repeatedly called for an independent investigation similar to former Sen. George Mitchell’s infamous report on steroids in baseball. The Senator was ignored, yet always remained careful in public as to how he talked about the NFL.

Nevertheless, his notes from the Walsh interview reveal how he really felt. “Cover-up” he wrote.