Eugene DePasquale: The Man with the Van (Video) 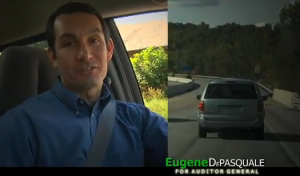 Depasquale has represented the city of York in the PA House since 2007. Before that he worked in the Department of Environmental Protection. But as the video makes clear, he returns to his native Pittsburgh often, where as a child he played football and baseball.

“I’ll be an Auditor General who protects Pennsylvanians, and the important programs that make a difference in our lives,” he says. “Early education for our children, affordable health care for our seniors and working families, and safer roads and bridges.”

“And if Governor Corbett proposes any initiative that makes middle class people work hard for less, while rewarding special interests, I will stand against it.”

The video, produced by Democratic ad man Bud Jackson, is a mix of testimonials, headlines about past accomplishments, and numerous references to DePasquale’s Pittsburgh roots.

This isn’t the first time Jackson has worked for DePasquale, either. He’s responsible for this gem from the York lawmaker’s first campaign in 2006.

The van has a story, too. DePasquale has been a crusader for a law prohibiting texting while driving.

“The van actually has a dent in the side from a driver who was texting while driving,” said campaign manager Liz Wagenseller.

And this is just one part of DePasquale’s summer efforts. Since June, he’s traveled across the sate to attend local Democratic and other events in two dozen counties.