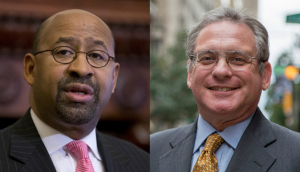 The lawsuit comes after Butkovitz released a scathing report going after Bell for using a non-profit group as a “slush fund.”

The group in question is the Mayor’s fund for Philadelphia and it was under an audit requested by Del Bianco. The fund gets most of its money from the Philadelphia marathon and then distributes grants and scholarships to help the city.

One of the accounts of the non-profit was a reserve account whose funds could be spent at the discretion of the City Representative, who was Bell at the time. Butkovitz claims that the fund was created to be used as, “a special slush fund.”

Several transactions, including a $45,000 trip for then-Mayor Michael Nutter to Rome, are being scrutinized by Butkovitz. Bell says that all of the transactions were approved by Bianco indicating that, “all the criteria had been met” for those transactions.

Nutter also blasted the report, calling Butkovitz “a liar, a snake, and a hypocrite” and that all transactions were properly approved.

Bell herself is now suing both Butkovitz and Bianco for defamations damages totaling $150,000. Those damages would cover, “injury to her [Bell] professional and personal reputation, for her emotional distress, and punitive damages to punish Defendants for their conduct and to deter such conduct in the future.”

The complaint alleges that Butkovitz is a, “a hyper-ambitious politician who hopes to one day aspire for political relevance” and Bianco is, “a vindictive woman” and that Bianco was simply afraid of losing her job so she made up claims against Bell.

Butkovitz is pressing on with his audit of the organization and dismissed the lawsuit. He said the suit only, “demonstrates Peterkin Bell’s and Mayor Nutter’s attitude that they are not accountable to anybody for that spending.”