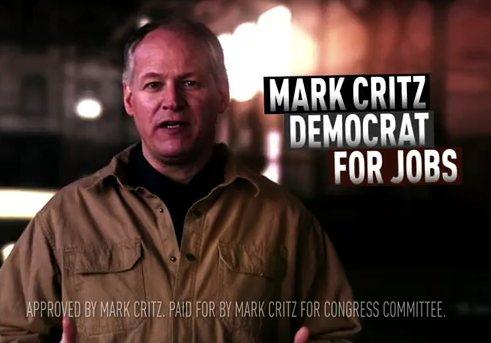 The ads emphasize similar themes, trying to present both men as strong representatives of western Pa. work ethic and advocates for economic growth and jobs.

Critz’s ad will air on broadcast networks in the Pittsburgh and Johnstown-Altoona media markets at 550-700 gross ratings points in the first week. According to the going rates there, that puts the ad buy at around $150,000.

Altmire’s camp will spend a similar amount to air their primary ad on broadcast and cable in the Pittsburgh market. They have a second spot that will air in the Westmoreland County cable market.

Altmire and Critz will both remain on the air through the primary on April 24. This week marked the beginning of the 45 day period before the election when the lowest advertising rates become available to candidates in Pa.

One ad seeks preempt Critz attacks that Altmire is too conservative.

“In western Pennsylvania, who you stand with with says a lot about who you are. Jason Altmire stood up to George W. Bush, and made sure the border fence was made with steel made in the U.S., not China,” a narrator says. “He fought the Tea Party Republicans when they tried to slash Medicare and Social Security.”

Critz has criticized Altmire for his support of a Balanced Budget Amendment, which he argues would lead to cuts in entitlement progams.

Altmire’s second ad, to air in Westmoreland County, emphasizes the Congressman’s roots there. He grew up in Lower Burrell, and the ad features footage of his football playing days in high school.

Both ads were cut by Envision Communications, Altmire’s usual vendor.

Critz’s ad similarly emphasizes his record in Congress. It highlights his intervention to keep open the Cumberland Mine and keep at work 700 miners.

“When Pennsylvania jobs are at risk, you fight for them,” Critz says in the ad. “The Cumberland Mine almost shut down. We kept it open and saved 700 jobs.” He pivots to education, job training, and Chinese trade.

The ad was cut by the firm Murphy Vogel Askew Reilly, which did Critz’s TV in 2010.

Unfortunately for Critz, the mine is in Greene County, no longer part of the district.

When it comes to Johnstown, each campaign’s decision is interesting. Both campaigns’ internal polls show Critz with solid support there, his home base. Altmire’s campaign will not advertise there this week, but Critz will.

State of the race

The two incumbent Congressmen were drawn into the same district last last year. About 66 percent of voters in the new 12th district are currently represented by Altmire. Internal polling on both campaigns show Altmire leading. However, most of the labor unions in the district have backed Critz.

Critz also won the press battle for the past two weeks; he challenge of his opponent’s nominating petitions, though ultimately unsuccessful, earned Altmire negative headlines across the district.

If it comes down to money, Altmire will likely come out ahead. He finished 2011 with about $350,000 more cash on hand than Critz.