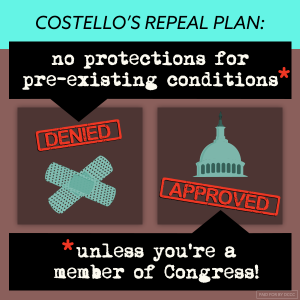 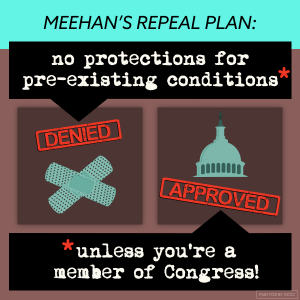 “As proof of the repeal bill’s devastating impact, Representative Costello and Meehan are exempting themselves from the punishment they are willing to inflict on their constituents. This digital ad campaign will educate voters in targeted districts about this morally bankrupt Congressional Carveout,” DCCC Spokesman Evan Lukaske said in a statement.

The ads will run on Facebook, Instagram, and Twitter.  Ad campaigns like this are not often used to move the needle of support on an issue, but rather help fire up the base and get them engaged, and to generate media coverage.

Costello’s campaign hit back at the DCCC, pointing to his record and going on the offensive against the Democrats.

“Congressman Costello is focused on working hard for his constituents.  If Nancy Pelosi and her liberal allies want to waste money by spreading lies about the congressman’s record, that is their prerogative. After all isn’t wasting money and lying what DC liberals do best,” Costello campaign senior advisor Vince Galko said in an email.

Costello and Meehan are two of four Republicans targeted by the DCCC for 2018.  Congressmen Brian Fitzpatrick (R-Bucks) and Lloyd Smucker (R-Lancaster) are the other two.

Update: The National Republican Congressional Committee responded to the ads.

“It’s shocking that Nancy Pelosi and her liberal allies would claim to have any credibility left as they sit in Washington watching Obamacare collapse around them. Democrats are desperate to deflect attention away from their failed record – which has caused premiums to skyrocket, restricted choices for consumers, and suffocated small businesses with higher taxes and more regulations,” NRCC Regional Press Secretary Chris Martin said in an email.