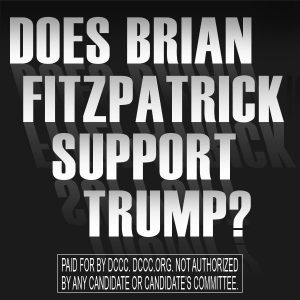 With their sights set on the 2022 election, the Democratic Congressional Campaign Committee is up with a new ad linking a GOP congressman in the Philadelphia suburbs to former President Donald Trump.

The DCCC unveiled a billboard ad on Monday morning tying Rep. Brian Fitzpatrick (R-Bucks) to Trump, in an exclusive release to PoliticsPA.

“Fitzpatrick’s flailing reelection campaign is stuck in reverse with its hazard lights blinking, and the congressman is clearly confused whether to turn left or right,” said DCCC spokesperson James Singer. “This new billboard asks a simple question that PA-01 voters have been wondering for years: does Brian Fitzpatrick support Trump?”

However, the National Republican Congressional Committee fired back at the DCCC over the ad.

“Voters are facing chaos in Afghanistan, higher prices on everyday goods and rising crime all thanks to Democrats’ weak leadership but the DCCC still has a deranged obsession with Donald Trump,” said NRCC spokesperson Camille Gallo. “If this is the Democrats’ big message for 2022, then their majority is already doomed.”

The billboard, which will be up for two weeks, comes just days after the Bucks County Courier Times published a story titled, “Rep. Brian Fitzpatrick is proud of his bipartisan record, but does it leave him vulnerable in 2022?”

According to LevittownNow, Fitzpatrick did not vote for Trump in 2016, although he told WBCB News that he voted for Trump in 2020 and “was the recipient of a robocall endorsement” from him last fall.

Fitzpatrick, along with the rest of the Republicans in Pennsylvania’s House delegation, voted against impeaching Trump in January.  However, Fitzpatrick was the lone Republican of the states congressional delegation to support certifying the state’s electoral votes for Joe Biden.

Fitzpatrick is the lone GOP member of Congress to represent a district in the increasingly blue-trending Philadelphia suburbs.

In 2020, Fitzpatrick defeated Democratic challenger Christina Finello by 13 points to earn a third term in Congress. Biden carried the 1st Congressional District over Trump by nearly 6 points, according to Daily Kos.

During his most successful reelection bid, ​​Fitzpatrick often promoted a wide range of bipartisan endorsements, while Finello linked him to Trump in most ads and criticized his vote for the GOP tax reform bill.

Fitzpatrick raised $1.1 million in the most recent FEC filing, which is his campaign’s largest haul to-date. His campaign’s previous record was his $945,000 Q3 haul in 2020.

A spokesperson from the DCCC said that according to the billboard vendor, this billboard gives “nearly 153,000 weekly impressions.”

This story was updated with a comment from the NRCC.