Kathleen Kane is swinging back against Democratic Attorney General opponent Patrick Murphy. In an ad meant to rebut Murphy’s own attack against her, Kane reiterates her campaign’s line that she has prosecuted more cases in Pa. than Murphy.

The ad is scheduled to begin airing tonight and through the weekend. 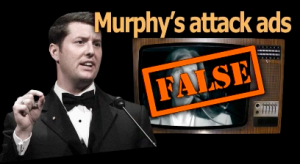 The ad throws some punches, too.

“Murphy gave bonuses to his political pals, instead of paying his taxes,” and “Murphy was caught breaking campaign finance laws.”

Finally, the ad makes the statement that Kane’s camp has for months: “Kane has prosecuted three thousand cases. Murphy has never prosecuted a single criminal in Pennsylvania.”

In a recent interview with the Harrisburg Patriot-News, Kane clarified that the 3,000 number was an estimate based on how many cases she had administered during her time in the Lackawanna County DA’s office. “Prosecuted” can mean a wide range of things. She estimated in that interview that she had taken about 24 cases to trial during her tenture, a campaign spokesperson later said the number was likely closer to 60.

“In a new ad, Kathleen Kane summons the audacity to talk about someone else’s taxes. Five years ago, Patrick Murphy’s campaign was notified that they owed $230 in local payroll taxes. So they paid the taxes,” said spokesman Nat Binns.

But, he said, the Abington Heights School District put a Municipal Lien on Kane’s family home in 2009 for failure to pay $849.84 in property taxes.

As we wrote about Kane’s other recent ad, which highlighted her endorsement from former President Bill Clinton:

More interestingly, their final-week ads show where each campaign thinks it is. Murphy’s most recent spot was a broadside of attacks against Kane on a number of issues. That, plus the fact that Kane appears to be entering the final on a positive note, suggests that both campaigns see her as the frontrunner.

Apparently, her camp sees the race closing since their April 15 internal poll showed her with a 42 to 33 percent lead.