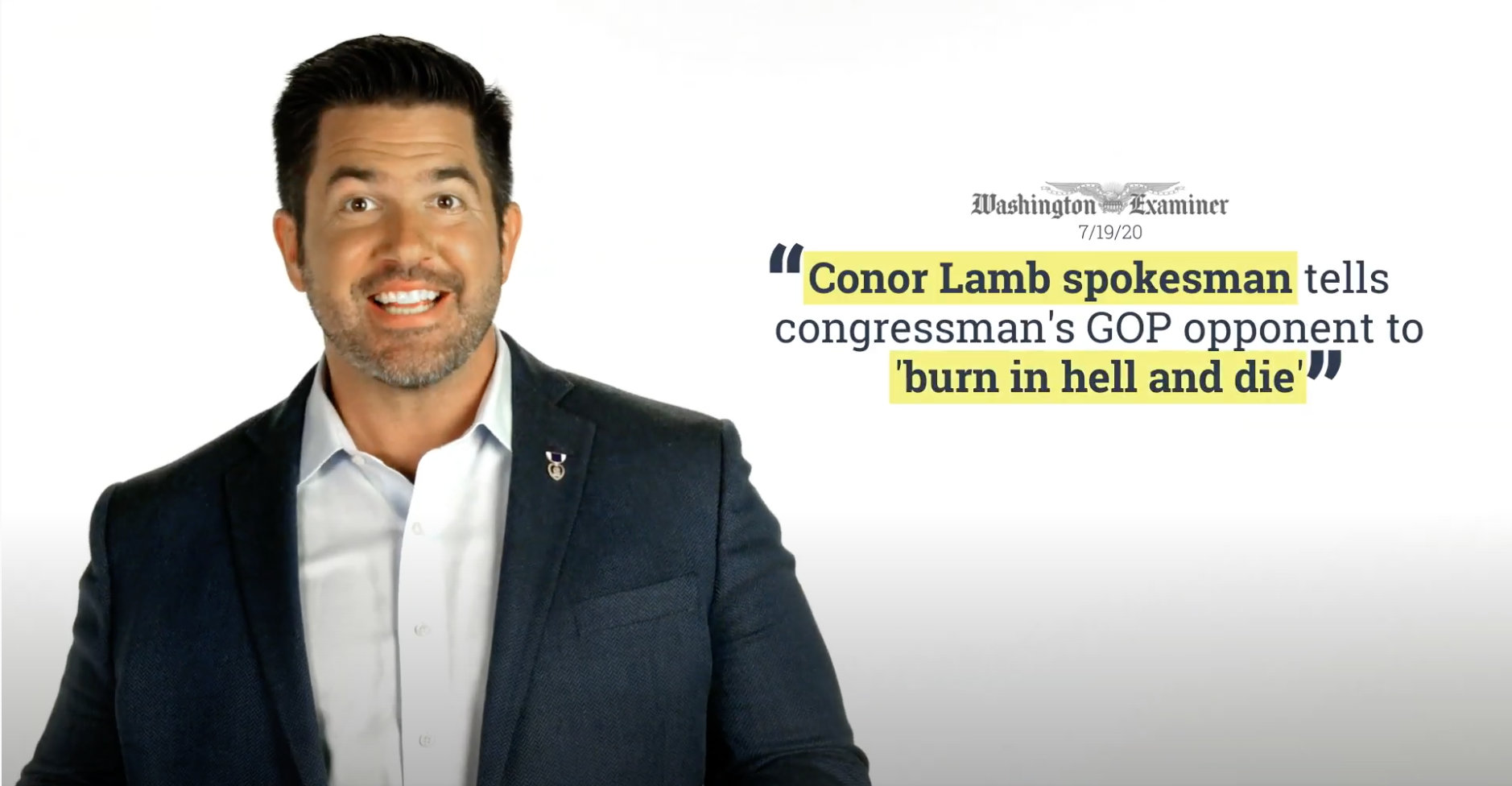 The GOP hopeful is out with a new television ad this morning highlighting a tweet from Rep. Conor Lamb’s (D-Allegheny) spokesperson and brother. Coleman Lamb quote-tweeted another user who said “burn in hell and die” and added, “Can add @SeanParnellUSA here.”

In an exclusive for PoliticsPA, the Parnell campaign released a 30 second spot, “Burn,” to criticize Lamb for his brother’s tweet.

“My opponent’s campaign said I should burn in Hell and die. And that’s actually a quote,” Parnell says to camera. “The fact is, I’ve already been to Hell. Combat in Afghanistan, I’m used to the Taliban wishing for my death. But a fellow American?”

“We need leaders who will bring us together, not pick childish fights,” he adds, and says Lamb is “part of the problem.”

The focus of the ad is from a since-deleted tweet from July 18, when Coleman Lamb, brother and spokesperson for the Lamb campaign, quoted a tweet that said “Burn in hell and die,” which Lamb responded that “Can add @SeanParnellUSA here.”

The Washington Examiner, a conservative-leaning DC publication, was the first to highlight the July 18 tweet.

Lamb’s campaign told the Pittsburgh Post-Gazette that the tweet was misconstrued, intended to lump Parnell in with Republicans who disrespected the legacy of the late Congressman John Lewis – but not to wish him harm. The PG’s verdict after reviewing the exchange: “None of the tweets, though, can definitively settle the battle over interpretation.”

“It was intemperate and [Coleman] should’ve realized how it could be misconstrued,” Lamb campaign manager Abby Nassif-Murphy acknowledged at the time. “”We think everyone from the President on down to Conor’s brother should think more, tweet less, and be nicer to each other.”

The Lamb campaign did not immediately respond for comment to PoliticsPA on the new ad.

Coleman Lamb has an active – and combative – Twitter presence, frequently jousting with his brother’s critics, including operatives with the National Republican Campaign Committee.

PA17 is one of the GOP’s top targets in Pennsylvania this cycle. President Trump narrowly carried it in 2016 over Sec. Hillary Clinton.

The Cook Political Report, Inside Elections, and Larry Sabato’s Crystal Ball all have the race in PA17 as “Likely Democratic.

This isn’t the first television ad that the GOP challenger has released in the race. Last week, Parnell released an ad celebrating the return of the Pittsburgh Penguins. The Lamb campaign has not released a television ad for the general election yet.

A spokesperson from the Parnell campaign tells PoliticsPA that this ad buy is 700 points over the next 3 weeks.

The tweet from Coleman Lamb has not been deleted, although the tweet he was quoting has since-been deleted.