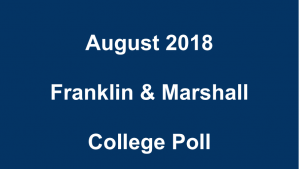 Wolf leads Wagner 52% to 35% among likely voters, while 12% of voters remain undecided. In this poll, 33% of Independents remain undecided, while 16% of Republicans and 6% of Democrats are still not sure as well. 48% hold a strongly or somewhat favorable view of Wolf’s job performance, while 36% hold a strongly or somewhat unfavorable view of the incumbent governor and 13% don’t know.

Casey leads Barletta 47% to 34% among likely voters, while 19% are still undecided. Currently, 38% of Independents are undecided, while 21% of Republicans and 14% of Democrats also fall in that category. 42% hold a strongly or somewhat favorable view of Casey’s job performance, while 29% have a strongly or somewhat unfavorable view of him with 25% fall under the category of “don’t know.”

The poll, surveying 511 Pennsylvania registered voters, included 243 Democrats, 200 Republicans and 68 Independents from August 20-26, 2018. The margin of error for this survey is +/- 6.1percentage points.

As Pennsylvania is viewed as one of the closest watched states for which party will control Congress next year, 48% of registered voters prefer the Democratic candidate while 39% are in favor of the Republican.

This polling garnered two very different reactions from members on opposing sides of the aisle, one a member of Wagner’s campaign and the other for Casey.

Andrew Romeo, who works on the communication end of Wagner’s campaign, had an issue with the sample of “likely voters.”

We’ve been over this – D+8 is a nonsense sample of “likely voters” given historical data in Pennsylvania. Just another poll you can throw in the garbage. https://t.co/keoTPvwi6V

The last poll F&M released before the 2016 election, based on the results of interviews conducted Oct 26-30, 2016, both showed Sec. Hillary Clinton and Democratic Senate candidate Katie McGinty holding double digit leads over Trump and Republican Sen. Pat Toomey. The poll showed Clinton leading Trump 49% to 38% and McGinty leading Toomey 43% to 33%. Both polls were towards the left end of many public polls leading up to the 2016 election.

However, F&M’s polling this year is nearly identical to the Real Clear Politics average of Wolf leading by 15 points and Casey up by 14.8 points.

Max Steele, who works on the communications end of Casey’s campaign, boasted about the most recent polling from this morning.

The @louforsenate team also insists their internals show them down 5-6. The fact that they refuse to release them tells you what you need to know about how confident they are in those numbers. #PASEN https://t.co/viO3cs95hg