The father of a rape victim referenced in an attack ad against Democratic Attorney General hopeful Kathleen Kane called the ad a lie and called on Republicans to withdraw it.

Update: the group will replace the ad. See below.

“The advertisement says that Kathleen Kane made a plea bargain in a rape case that a judge says wasn’t tough enough. I know that’s a lie, because it was my daughter that was the victim in the case,” he wrote in a letter provided by the Kane campaign. PoliticsPA will not publish his name in order to respect the privacy of the family.

“This advertisement is offensive to me and to my family. I’d like to ask the people who made this outrageous advertisement if they would like their daughter’s tragic story all over television.”

The letter was first reported by Chris Brennan of the Philadelphia Daily News.

The ad is being broadcast in the Philadelphia media market and is paid for by a group called the Republican State Leadership Committee based in Washington, DC.

It is very hard-hitting; by far the nastiest attack ad of the 2012 cycle so far in Pa. It alleges in part, “Of Kane’s few cases, a judge rejected a weak plea deal she made because of the brutality of the crime and age of the victim.”

The Kane campaign also assembled court documents from the trial in question. Kane’s name is not listed as the attorney involved with the sentencing.

PoliticsPA is seeking a reaction from the RSLC regarding the letter. The group had earlier published a fact check on all of the claims in its ad; the court documents cited therein also appear to back Talerico’s claim that Kane was involved only in the preliminary administrative stages of the case.

Update: The RSLC is backing off of its claim in this case. Said the organization’s President Chris Jankowski:

“Following the issuance of statements from those close to the case that did not come until today, the RSLC has chosen to remove the reference to the case and instead focus on numerous other instances in which Kane failed Pennsylvania victims of abuse.”

He reiterated the group’s other criticism, that Kane had claimed credit for “prosecuting” 3,000 cases but took only two dozen to trial.

“The bottom line is that Kathleen Kane once claimed credit for prosecuting this case and is now taking major steps to distance herself from it.  It is difficult to know the truth with Kane’s record, but we will respectfully move on from discussing this particular case and focus on those failures she is not contesting,” Jankowski said.

The buy is an independent expenditure and Freed was not involved with its production or content. Freed’s campaign did not respond to a request for comment on the ad.

“As a father who has seen his family go through too much pain already, I am asking Dave Freed and the people who made this offensive advertisement to take it off the air immediately,” the father wrote.

Here’s the full letter written by the victim’s father, from a PDF from the Kane campaign. 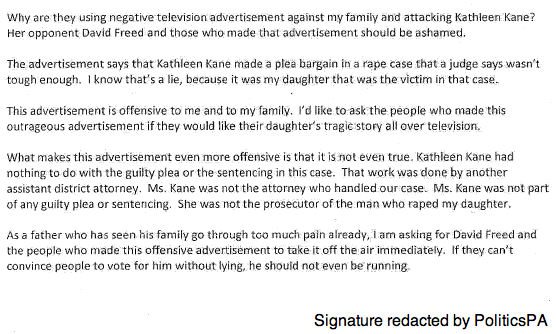