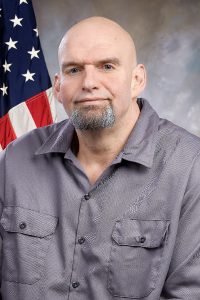 On Thursday, Lt. Gov. John Fetterman’s Senate campaign announced that he raised more than $3.9 million in the first quarter of 2021.

“I am overwhelmed with gratitude and deeply humbled by all of the support we have received from all 67 of Pennsylvania’s counties,” Fetterman said in a release. “On behalf of Gisele and myself, thank you so much for the support. We are going all-in and are committed to building a people-powered campaign, and it means the world to us that we have received over 140,000 donations from people across the country.”

Fetterman’s campaign said that the $3.9 million is the most a candidate for U.S. Senate in Pennsylvania has ever raised in their first quarter. The release added that 99% of contributions have been donations under $200, with an average donation of $28. Over 90,000 people have donated to the campaign thus far, according to the campaign.

Your support means the world to Gisele and I.

It is unclear how much Fetterman’s campaign spent during the first quarter.

During Fetterman’s third place finish in the Democratic Senate primary in 2016, the then-Braddock mayor raised just under $760,000 during the entire campaign.

Fetterman is the first Senate hopeful to announce his first quarter haul, although he isn’t the lone Democrat to announce a bid for the open seat.

The Democratic field is expected to grow in the coming weeks and months.