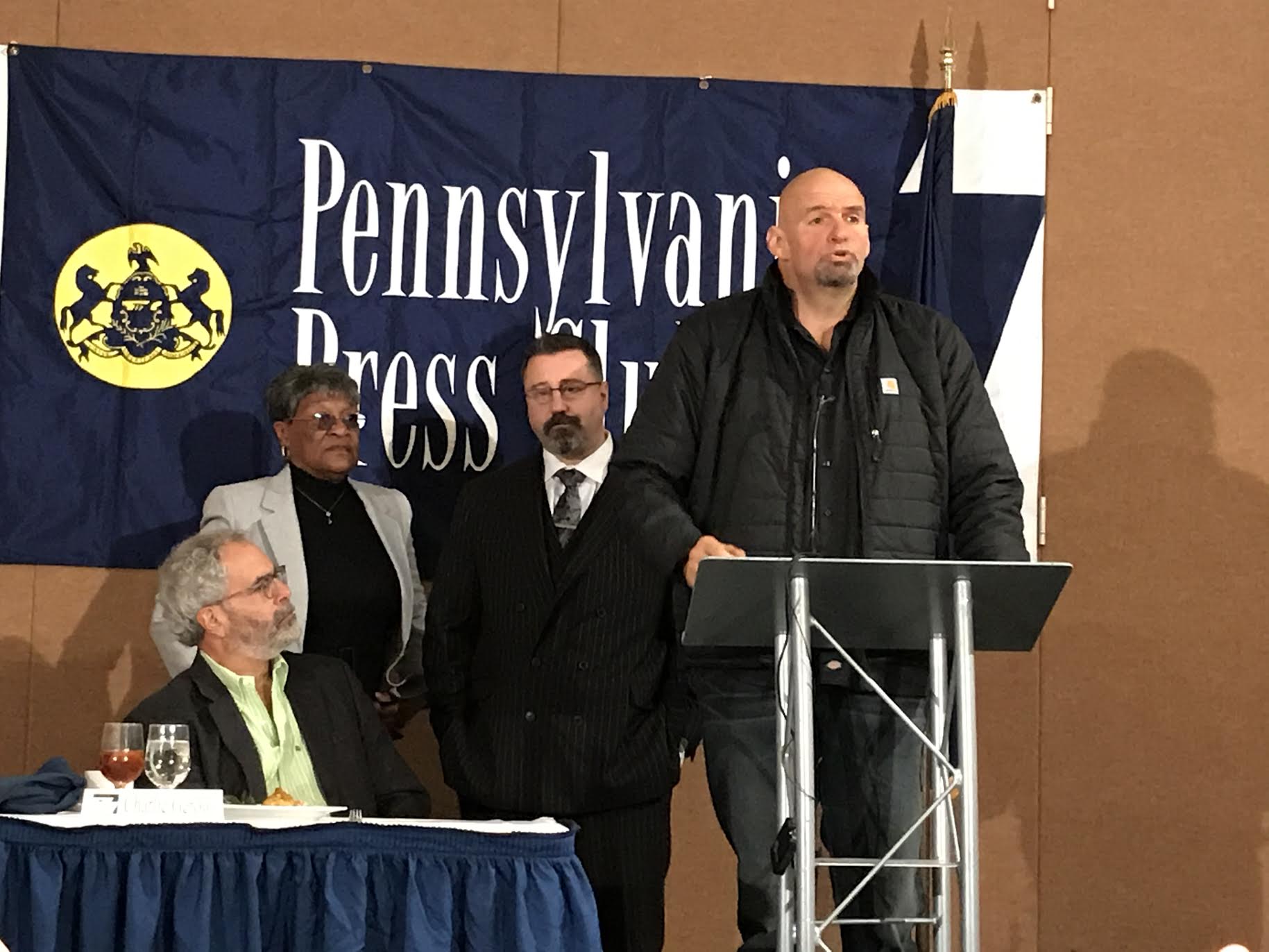 HARRISBURG- One of Lt. Gov. John Fetterman’s roles serving in state government is being the Chair of the Board of Pardons. During his first appearance at the Pennsylvania Press Club since being elected to serve alongside Gov. Tom Wolf, Fetterman shared the stage with two former life sentence inmates that he hired after their sentences were recently commuted and made the case that Pennsylvania has a unique opportunity to address criminal justice reform.

“We have a once in a lifetime opportunity to address this,” Fetterman said, while talking about reforming the states commutation process. “For me, I think this is about justice.”

Fetterman said the issue of commutations in the state is “one of the greatest causes” of his life, “not just politically, but for me personally,” and described the process as being broken prior to the Wolf administration.

“This has been a process that has been horribly broken and to the point of nonexistent effectively in Pennsylvania,” Fetterman said, while comparing the number of commutations under previous administrations.

One of the points that Fetterman drove home in his address was that he believes that if an individual “never took a life directly,” that they should not be sentenced to life without parole. George Trudel and Naomi Blount, who served a combined 68 years in prison before their sentences were commuted this year, spoke about their personal story for around 10 minutes and were examples of why Fetterman believes that the state needs to reform the process.

“From my perspective, we have this catastrophic bottleneck and however long I’m honored to serve as your Lieutenant Governor, this will be one of the defining things that I want to accomplish,” Fetterman said. “It’s the only thing I care about quite frankly from a personal standpoint, so intensely that I’m willing to do whatever it takes to push every limit and boundary, to make sure we don’t have hundreds if not thousands needlessly dying in prison.”

During the Q&A portion of the event, Fetterman also said that he “absolutely” supports a program to compensate people who are exonerated and freed from prison, which Pennsylvania currently does not have.

Also falling under the umbrella of the criminal justice reform conversation that Fetterman is well known for in Pennsylvania is his support for recreational marijuana. Fetterman supported recreational marijuana legalization prior to leading a statewide listening tour on the topic at the direction of Wolf, but emphasized that he believes that “cannabis prohibition doesn’t make sense” and thinks that regulation of it will be beneficial.

“Governor Wolf and I believe that legalizing it brings regulation,” Fetterman added. “Regulation brings safety and purity and testing and control distribution.”

He went on to liken marijuana with alcohol and stressed that making it legal doesn’t make it harmless, while adding that if it were legalized it wouldn’t be lower than the age of 21.

“Do not conflate legal with harmless,” Fetterman said, while speaking about recreational marijuana. “That’s not true.”

Another key component of the marijuana debate that Fetterman detailed was his support for removing Marijuana as a federal Schedule 1 drug, and made the case that medical marijuana was even popular in “red counties.”

Although Fetterman has touted his support for recreational marijuana, GOP leaders in Harrisburg have scoffed at the notion, including state Senate Majority Leader Jake Corman who in December said that legalizing marijuana for recreational use is “reckless and irresponsible” and vowed to do everything in his power to prevent it from happening.

While some Democrats in the state have begun lining up behind recreational marijuana legalization, a wedge has been driven between some in the party about fracking. Allegheny County Executive Rich Fitzgerald and Pittsburgh Mayor Bill Peduto, both Democrats, recently found themselves on opposite ends of the argument about the impact of fracking in western Pennsylvania.

At the national level, several Democratic presidential hopefuls have voiced their support for a fracking ban, including Sen. Bernie Sanders, who Fetterman backed in 2016. When Fetterman was asked about several Democratic presidential candidates supporting a fracking ban, he said that he supports Wolf’s position on the topic, describing fracking as a “vital, thriving industry” in Pennsylvania.

“I support the governor,” Fetterman said. “It’s a vital, thriving industry here in Pennsylvania and whatever any respective candidate says is that the reality on the ground in Pennsylvania is that it exists and it’s going to continue.”

He also added his support for Wolf’s plan of taxing natural gas to fund a variety of projects.

Towards the end of the Q&A segment of the event, Fetterman was asked if it was “acceptable to disregard Senate rules,” referencing the viral moment from the state legislature in the summer after state Sen. Katie Muth (D-Montgomery) read a letter defending general assistance funding, although state Sen. Majority Leader Jake Corman (R-Centre) called for a “point of order.”

“I want to be clear,” Fetterman said. “No one celebrates what happened in the Senate that day.”

Fetterman, who later acknowledged that he broke Senate rules by ignoring the Majority Leader after that, said that they he believes they and GOP leadership have moved on from the “unfortunate episode.”

The final question that Fetterman fielded from the Q&A portion was if he was interested in challenging Sen. Pat Toomey (R-PA) in 2022, but said that he has “not made up my plans for ‘22” and said he was concerned about the issues at hand as Lt. Gov, specifically citing criminal justice reform again.

The next PA Press Club luncheon will be on January 27.