Watching the Flyers-Penguins game last week, I asked a non-political friend what stood out after two Democratic Attorney General ads aired back to back.

It’s been a major theme for Kane, who served as an Assistant District Attorney in Lackawanna County. It’s an effective, simple message in a campaign for an office that few voters would list as their top concern. 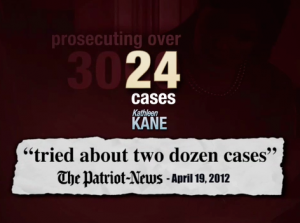 Her opponent, former Congressman Patrick Murphy of Bucks County, is pushing hard against it. His campaign unveiled a new television ad (above) about 6 hours after the Harrisburg Patriot-News published a story which, among other issues, looked into Kane’s claim.

The ad, which began airing in full on Thursday, features an effective visual of the 3,000 number ticking down to 24.

We highly recommend you read the full story in order to get the full picture. Here are the most relevant sections for the purposes of this article:

Kane claims she has prosecuted more than 3,000 cases. But to be clear, that doesn’t mean she tried that many.

In fact, she said that in her 12 years in the DA’s office, she tried about two dozen cases, including some that gained statewide attention.

Kane admits that [3,000 cases] claim wasn’t based on actual count but rather a mathematical calculation. She figures she was assigned about 25 cases a month for 12 years, not counting other cases she handled in her areas of specialization, including elder abuse and white-collar crimes.

Kane reiterated her campaign’s argument that Murphy has prosecuted zero cases in Pa. (He was an attorney in the U.S. army and prosecuted cases abroad, though far fewer than Kane).

“If it comes down to a question of how many cases we’ve tried, even if I tried two, I’ve tried more than my opponent,” Kane told the Patriot.

Pretrial motions and hearings are important elements of the criminal justice process and indeed, the job description of the Attorney General is arguably closer to the the definition of prosecuting than trying.

For the most part, Kane’s campaign has been careful to use the terms accurately. When this reporter mixed the terms early in the campaign, a spokesman called immediately to correct my error. It’s a strong overstatement to call Kane’s claims “lies,” as Murphy does.

The average person likely doesn’t know the difference, something that Kane has certainly benefited from in this campaign. That’s why Murphy’s ad making the distinction has the potential to have an impact.

However, it appears Kane blurred the line between prosecuting and trying cases at least once.

The Murphy campaign followed up today with a web video on the same theme, which cites Daily News columnist John Baer’s observation that, “when she spoke at a rally with Clinton last week in Willow Grove, she said she’s ‘given thousands of closing arguments,’ which sure sounds like a reference to trials.”

“This is exactly the kind of campaign you’d expect from a candidate who’s lost a 16 point lead the in the polls,” said Kane spokesman Josh Morrow.

The real question is, will Murphy’s last minute barrage make the difference? Or will too few undecided voters hear the message to matter?