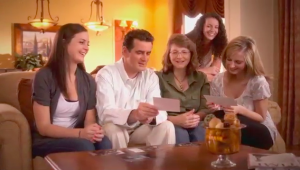 Mike Fitzpatrick is doing it for his daughters. That’s the message of the quasi-freshman’s first television ad of 2012. The Republican Congressman faces attorney Kathryn Boockvar in Democrats’ top-targeted race in Pennsylvania.

“My wife and I have worked to give our kids a strong future. We’ve been blessed to watch our first three daughters go to college and succeed,” he says. Then, straight to camera, “But if our country doesn’t change course, they won’t have the same opportunities we had.”

His sign-off is among the catchier ones we’ve seen.

“I’m Mike Fitzpatrick, and I approve this message because our kids are growing up fast.”

Fitzpatrick’s wife Kathy was a chemist at Merck and now teaches AP Bio at Archbishop Wood. His daughter Katie is a nurse at St. Mary’s and daughters Maggie and Molly are in college.

The spot was produced by the Strategy Group for Media based in Ohio. It’s set to air on cable in the district starting today, and Fitzpatrick’s campaign intends to remain on the air through election day.

The 8th congressional district is a perfect one for cable because 92 percent of its voters live in just 3 cable zones (the average congressional candidate is looking at 6 or 7). Plus, cable saturation here is significant. That’s luck for both PA-8 candidates because the Philadelphia broadcast television ads are among the more expensive in the country.

Fitzpatrick served for 10 years as a Bucks County Commissioner prior to his first election to Congress in 2004 (he served one term, lost to Dem Pat Murphy in 2006, but came back and beat Murphy in 2010).

His opponent, Kathy Boockvar, is an attorney who would serve as an elected official for the first time if she wins (though she ran in 2011 for Pa. Commonwealth Court and in 2007 for Bucks County Register of Wills).

So his media has an easier task than Boockvar’s. They don’t need to introduce someone new, they simply need to remind voters: remember Mike Fitzpatrick? Yeah? He’s still a nice guy.

The ad also shows what an earlier web video from his campaign said, that he has a wife and three daughters. Such a man would never vote in a way that’s detrimental to women, they suggest. Several of Fitzpatricks critics including Boockvar have accused him of participating in the “war on women,” after his vote to defund Planned Parenthood.

Boockvar’s campaign said this ad misleads about the kind of future Fitzpatrick has voted for.

“Congressman Fitzpatrick’s notion of a ‘strong future’ for his children is ludicrous given that thanks to his short time in Congress Pennsylvania’s children will be shouldering the debt of the trillions of dollars he’s voted to add to the exploding deficit,” said Boockvar Campaign Manager Jon Blair.

“The ‘opportunities’ that he is apparently concerned about preserving for children don’t include Medicare as we know it, but rather an expensive voucher system that he wants to hand over to private insurance companies to run.”

The remark refers to Fitzpatrick’s vote in favor of the House GOP budget, authored by Rep. Paul Ryan (R-WI), which would transition Medicare to be more like a voucher program. Critics say it will result in diminished care for current and future seniors, while supporters argue that Medicare on its current path is headed for bankruptcy.