By Natalka Karaman and David Gerber 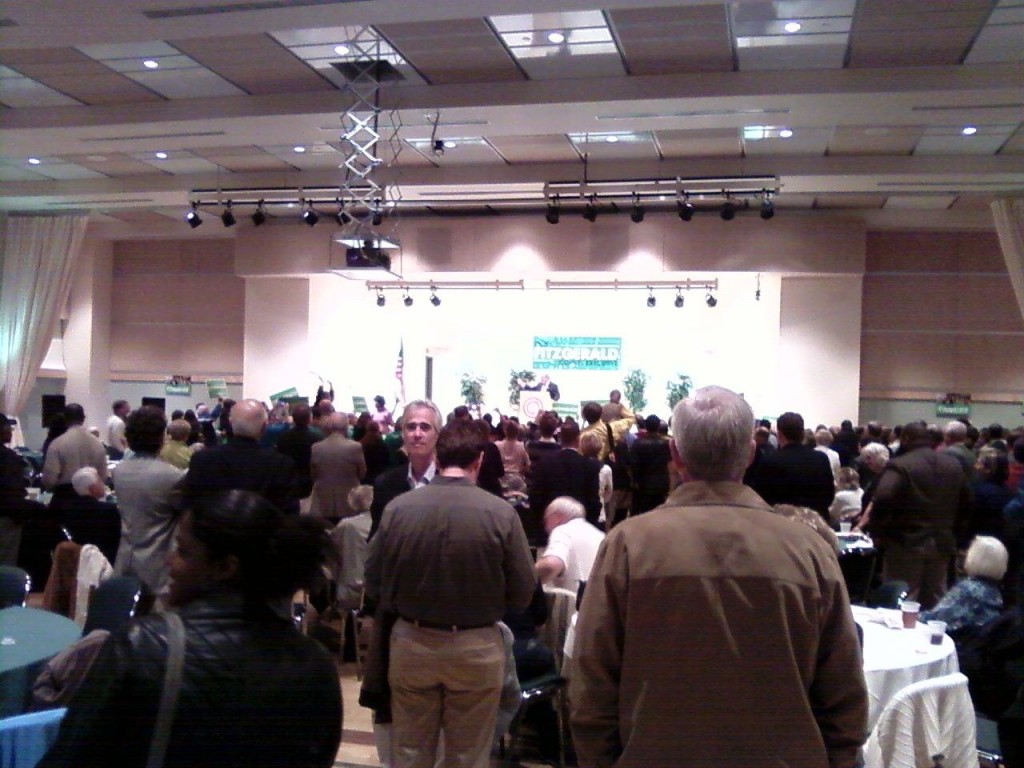 Amid hot dogs, hamburgers, nachos and soft pretzels, a steady stream of Democratic supporters, friends, family, campaign staff, and media gathered at the IBEW building in Pittsburgh’s south side to watch the election results come in for Allegheny County.

Posters for Fitzgerald and Controller candidate Chelsa Wagner decorating most available wall space, there was no real tension or uncertainty in the room. Anticipating a win, attendees mingled and chatted comfortably.

Wagner spoke around 9:30 with 76 percent of the vote in, safely up 64 to 35 percent. She thanked everyone and announced the passing of the Pittsburgh Library Initiative to an enthusiastic round of applause. The final result was a 72 to 27 percent margin win.

She reiterated her support for Fitzgerald saying, “Under his leadership, I think we have a great future here in Allegheny County,” and announced that he would be speaking shortly.

Total voter turnout for Allegheny County came in at 26 percent.

Fitzgerald took the stage at 10:05 with his entire family, who were dressed in green striped shirts. He announced, “I have just received a call from Mr. Raja to congratulate me and offer his support…I appreciate that!”

Rich Fitzgerald acknowledged that it was a hard-fought campaign but remained optimistic for the future of Allegheny County.  “We need to continue to move forward in this region,” he said.

Fitzgerald thanked the men and women who worked with him, especially citing the support of Rep. Mike Doyle.

“If we don’t have a strong middle class, Shame on us!” Fitzgerald shouted to roars, cheers, and applause.

Thanking the voters, his wife, his kids, and his parents, Fitzgerald ended his speech to the first notes of  Celebrate Good Times, which came blasting over the speakers.

Mike Mikus, Rich Fitzgerald’s campaign manager, talked to PoliticsPA about what the victory meant for Pennsylvania and for Democrats as a whole.

“Allegheny County Democrats are back, and we are on the move,” he said, bringing up the uncertainty caused by the 2010 elections.

“What happened in Ohio and what happened here shows that the Republicans have gone too far and that 2012 is shaping up to be a good year for the Democrats”.

Meanwhile, at the Greentree Radisson, Republicans seemed resigned to the results. They celebrated Raja’s effort.

At his concession speech, Raja was welcomed by a full ballroom of supporters – including PA House Majority leader Mike Turzai – chanting his name in unison.

“Make no mistake, this has been a tough fight,” said Raja. “Tonight, let us all hope that Mr. Fitzgerald will devote the same energy and enterprise to solving the county’s problems that was on display throughout this tough campaign.”

“He is an individual who employs hundreds, a person who is making it happen in Allegheny County,” said Turzai. “This man not only gives back in his life, he has also taken the time out of his busy schedule to run for political office to make a difference, we should all be proud of our friend Raja.”

Raja’s campaign manager, James Genovese, said the campaign had done everything it could to deliver the win.

“I support Mr. Raja and his vigilant effort to win County Executive,” said Genovese. “We left everything on the field and did all we could do, and that is what you are supposed to do.”

Although in midst of a loss, Raja declared that he will not become absent from the political arena and hopes to continue in his endeavors to make a difference.

“I am not going away. I will continue to be involved because, like you, I care passionately about the future of our county and our region. And to my voters, supporters, and friends don’t get discouraged, stay involved, stay active – because the change we seek can only be accomplished if we work together.”