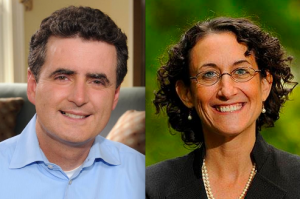 Incumbent Mike Fitzpatrick and opponent Kathy Boockvar faced off in the first of three debates on Thursday.  While many issues were in contention, the main focal points of the debate were the differences in their opinions with respect to tax policy and Medicare expenditure.

Boockvar attacked her opponent’s support of the Bush era tax cuts and the Ryan budget, which she fiercely opponent called out, claiming they “added more to our deficit than the wars in Iraq and Afghanistan combined” and would put the burden on the shoulders of the nation’s children.

Fitzpatrick did not take this attack lightly, however, and fired back on his opponent’s lack of specificity on whether or not she supports the Obama administration’s tax plan.  This plan would result in a tax increase on individuals making $200,000 or families making $250,000.  Fitzpatrick questioned this plan, declaring it would threaten over one million small businesses and calling it a “tax on Bucks County families”.

Healthcare was no small part of the discussion.  Fitzpatrick attacked the $716 billion he said the Affordable Care Act cut from Medicare, to which Boockvar quickly countered, explaining that the ACA saves money for the country by “changing how providers are paid”.  She also noted that the Ryan Budget, which Mike Fitzpatrick voted for, also cuts $716 billion dollars from Medicare.

The fifty minute debate was heard on WNPV-1440 AM radio last Thursday, but is also available on the station’s website.  The remaining debates are at 11 a.m. Thursday at the Lower Bucks campus of Bucks County Community College, in Bristol, and finally on Friday at 8 to 9:30 a.m., Oct. 26 at the Waterwheel Restaurant in Plumstead.