Fitzpatrick Embraces No Labels in Bristol 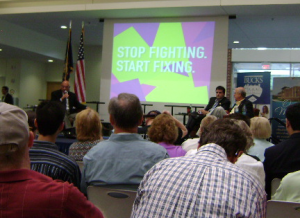 Bristol — Mike Fitzpatrick (R-Bucks) casts himself as Pennsylvania’s bipartisan Congressman. He held quite a public meeting Saturday with the bipartisan policy group No Labels to emphasize it.

The forum – where questions and much of the presentation were prearranged – focused mostly on Walker’s organization, whose slogan is “Stop Fighting. Start Fixing.” Fitzpatrick is among its 80 congressional members.

For example, Walker started the off the occasion with an approximately twenty minute long power-point presentation about the group and the bills it has advocated for (only one of which – a bill to replace congressional travel with teleconferencing – is principally sponsored by Fitzpatrick).

Walker pointed the finger at both parties. “Most Democrats are far left of center, most Republicans are far right of center.”

Fitzpatrick agreed with a caveat. “I noticed the left moved further left than the right moved further right” between his two terms in Congress (from 2007 to 2011).

In an increasingly partisan Congress, Fitzpatrick has a record that passes for bipartisan. He split from the majority of his party 19% of the time during votes in 2013 so far. That’s more than all but 16 of the 435 members of Congress and all but 3 Republicans according to the Washington Post votes database.

It matches the 8th district, which is comprised primarily of Bucks County.

“There are few districts that are competitive, this is one,” Walker said.

Two Democrats are vying to face him in 2014, Shaughnessy Naughton and Kevin Strouse, and the race is likely to be the top congressional contest in Pa.

Fitzpatrick said he embraces the toss-up nature of his district and that he turned down party leaders who offered him an easier, less competitive seat during the redistricting process. The new map would have split Bucks County in half and transfer the more Democratic lower half into the 13th district. Fitzpatrick said he rejected that idea.

“You’re not dividing Bucks County as part of the redistricting process,” he claims to have told them, because he felt representing all of Bucks made him a “more balanced, better representative.”

Though town halls have become notorious for instantly viral outbursts, there was only really one such expression of emotions from the crowd. It came when Walker stated that immigration reform was needed and the attendees responded with shouts and boos.

The tone of the crowd overall grew quietly yet noticeably angry over the course of the event. It was hard to tell, however, whether this was because Walker used most of the speaking time (he spoke first and responded first to four out of the six questions) or because all questions had to be written in advance. Instead of using the writers’ actual language, the moderator asked the men about each question’s topic. Ultimately, it seemed a product of the fact that the audience, which seemed significantly pro-Fitzpatrick, never got any chance to really interact with him.