In what looks like a “Best of GOP attacks, 2010 edition” highlight reel, Rep. Mike Fitzpatrick (R-Bucks) this week unveiled his first negative television spot against challenger Kathy Boockvar. The ad centers on the Democrat’s support for Obamacare. 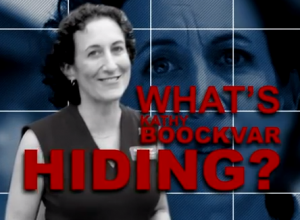 “Boockvar supports government-run health care, which cuts Medicare by over 700 billion dollars and outsources jobs. Lead by Nancy Pelosi and supported by Boockvar, this plan could destroy 800,000 American jobs,” blasts a female announcer.

Mike Fitzpatrick, on the other hand, “is always putting people before politics. It’s why he’s protecting Medicare and fighting to create jobs.”

Boockvar has attacked Fitzpatrick for weeks over his vote to defund Planned Parenthood and his support of two GOP budgets that she says would end Medicare as we know it.

“There’s exactly one person in this race who has actually voted to cut billions from Medicare and protect tax breaks for companies that ship our jobs overseas, and that’s Congressman Fitzpatrick,” Boockvar’s Campaign Manager Jon Blair said of the ad. “Mike Fitzpatrick’s attempt to pin his own voting record on Kathy Boockvar is a desperate play intended to distract voters from his verifiable record of saying one thing here at home and doing exactly the opposite in Washington.”

Both candidates and their supporters are endeavoring to paint the other as an extremist in this moderate suburban district.

For example, when Fitzpatrick said at a recent Tea Party meeting this:

“And one of the principles is that we need to support people who have a history and know what it is like to sign the front of a paycheck, not the back of a paycheck, the front of a paycheck also includes you took a risk and you build a business on your own without the federal government standing next to you as you’re signing a personal guarantee it’s just you and your wife and your banker, you know that’s it. Taking that kind of a risk.”

The Pa. Democratic Party, the AFL-CIO, Pa. Working Families, and the CREDO super PAC all issued statements trying to make the connection.

“People who teach your children, stock your shelves and protect your streets receive paychecks and they deserve your respect Congressman,” said Mary Dunne, President of the Bucks County Central Labor Council, in an AFL-CIO press release. “Just because you’re speaking at a private fundraiser, to a tea party crowd, doesn’t mean you can just write off the people who work for a living.”

Fitzpatrick later said that he mispoke, meaning to say “not just the back of a paycheck”.