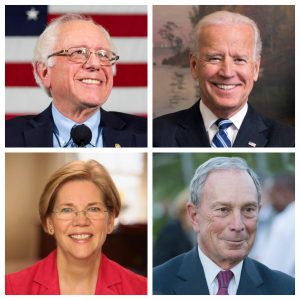 As the Iowa caucus quickly approaches, the race in the keystone state appears to be tightening with former Vice President Joe Biden’s lead slipping and a few other Democrats making up some ground.

A new Franklin & Marshall College poll shows the Scranton native with the lowest support he’s had since they started tracking the race in July, although he is still holding a several point lead in Pennsylvania over the other Democratic presidential frontrunners in 2020.

Biden leads the way with 22% of support in the Pennsylvania Democratic primary, while Sen. Bernie Sanders comes in second place for the first time with 15%, and Sen. Elizabeth Warren registering with 14% support. Despite former New York City Mayor Michael Bloomberg’s late entrance into the race, he comes in fourth place with 7% in the first F&M poll with him included, surpassing former South Bend Mayor Pete Buttigieg at 6%, and Sen. Amy Klobuchar (D-MN) and businessman Andrew Yang locked in at 5%. All of the other Democratic presidential hopefuls polled at 1% or less in this latest poll, with 19% saying they don’t know who they will support.

Latest F&M Pennsylvania Poll: Former Vice President Joe Biden (22%) remains the top choice for President. Senators Bernie Sanders (15%) and Elizabeth Warren (14%) remain in the top tier of candidates, which is consistent with the standings of the race nationally.

This specific poll surveying 292 registered Democrats in Pennsylvania, collected data from January 20 to January 26 has a margin of error of +/-9 percent.

This is now the third consecutive F&M poll showing Biden in the lead since their first poll on the matter in July 2019, but the race has tightened since their most recent poll in October 2019. In July, Biden carried 28% of the support in the primary in the state, while the next closest was Warren with 21%, and Sanders at 12%. In October, Biden widened his lead carrying 30% in the state’s primary, while Warren registered at 18%, and Sanders held steady at 12%. Since the first poll in July, this is the lowest percentage for Biden, although he remains in first place, but falling in line with the first poll in July, 19% remain undecided on who to support in the primary.

Biden holds the most endorsements among Democratic elected officials in the state with Sen. Bob Casey, plus a majority of the state’s Democratic Congressional delegation supporting his bid for the White House. Warren carries several notable endorsements in the southeast that include Philadelphia Mayor Jim Kenney and Philadelphia District Attorney Larry Krasner supporting her bid for the White House. Sanders, who has risen in the most recent F&M poll, received his first significant endorsement in the state this morning with state Rep. Sara Innamorato (D-Allegheny) endorsing his presidential campaign.

See the full data of the most recent F&M poll here.