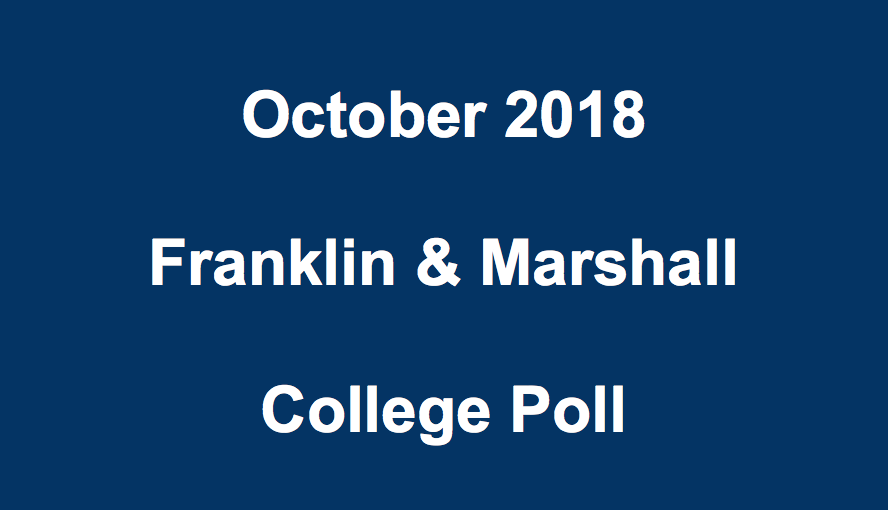 Wolf leads Wagner 59% to 33% among likely voters, while 5% remain undecided. Franklin & Marshall states that “the dynamics of the race have shifted considerably in favor of Governor Wolf” compared to September’s poll. Wagner currently holds a -20 net favorability rating, which is a considerable drop from September’s poll that had the GOP candidates net favorability rating at -9. Remaining rather consistent with previous polls, 54% believe that Wolf is doing an “excellent” or “good” job as Governor, while 28% believe he is doing a “fair” job, 16% say a “poor” job and 3% don’t know.

Casey leads Barletta 50% to 35% among likely voters, while 15% remain undecided. Franklin & Marshall states that “the dynamics of the race have changed little since our prior surveys,” although one significant change is the percentage of voters having an opinion on Barletta. 36% still “don’t know enough about Mr. Barletta to have an opinion,” while in September’s poll that number was 51%. Remaining consistent with previous polls, 43% believe that Casey is doing an “excellent” or “good” job as Senate, while 25% believe he is doing a “fair” job and 23% say a “poor” job.

The poll, surveying 537 Pennsylvania registered voters, included 254 Democrats, 211 Republicans and 72 Independents from October 22-28. The margin of error for this survey is +/- 6 percentage points.

As is the case with most races across the nation, President Donald Trump is impacting the way Pennsylvanians select their Congressional representatives in 2018. 69% of those who plan to vote for a Democratic congressional candidate are casting their ballot as a vote against Trump and the Republicans in Congress, while an even larger 83% of those polled who plan to vote for a Republican congressional candidate are doing so in sign of support for Trump and the GOP members of Congress.

The eyes of the nation will be on various Pennsylvania races next week that may determine who controls the House of Representatives for the next two years. 53% of registered voters prefer the Democratic candidate for Congress, while 38% prefer the Republican candidate. Despite the Democrats edge in this category, Republicans hold a narrow enthusiasm gap in this poll. 75% of Republicans say that they are “very interested” in the election, while 73% of Democrats say they are “very interested.” Just last month, the Democrats held a 64-58 edge of the GOP in this category. Interest in the election is higher for Democrats, Republicans and Independents than it was in August or September.

The last poll F&M released before the 2016 election, based on the results of interviews conducted Oct 26-30, 2016, both showed Sec. Hillary Clinton and Democratic Senate candidate Katie McGinty holding double digit leads over Trump and Republican Sen. Pat Toomey. The poll showed Clinton leading Trump 49% to 38% and McGinty leading Toomey 43% to 33%. Both polls were towards the left end of many public polls leading up to the 2016 election. However, F&M’s polling this year is nearly identical to the Real Clear Politics average of Casey up by 15.5 points, although the RCP average for Wolf’s lead is 17.7 points.