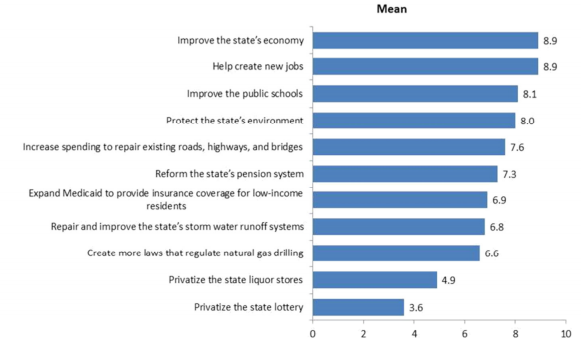 A Franklin & Marshall poll of a variety of issues shows dwindling support for liquor privatization as attitudes on guns, marijuana, and gay marriage remain similar.

The same poll that found Gov. Tom Corbett with tough approval numbers painted a mixed picture of his policy agenda. Some of his broader goals are public priorities, including improving the economy, creating jobs and fixing the state pension system. But voters care little about some others, like privatizing state liquor stores and the lottery management.

The graph above shows respondents’ average 1-through-10 ranking of a variety of issues facing the state. 1 is least important, 10 is most important.

Speaking generally, 58% said the state is on the wrong track while 28% said it is heading in the right direction.

A plurality, 47%, of those surveyed expressed support for privatizing state liquor stores. 40% oppose privatization. It’s the first time since F&M began polling the issue in 2002 that support is below 50%.

Corbett and other Harrisburg Republicans favor divesting the state of its 600 liquor stores, noting that 48 other states leave the industry to the private sector and arguing that expanding sales would yield increased tax revenues. Opponents say the move would cost the state a dedicated revenue stream and risk 3,000 good jobs.

It’s been a top issue in Harrisburg for months.

According to the poll, support has diminished among Democrats and Republicans, with support among Democratic voters at 41%, a decrease from 48% in the February poll. GOP voters’ support has decreased, the survey suggests, to 54% from 61%.

The picture grows even more complicated when the pollster added the possibility of modernization. Respondents were told, “Instead of selling the state liquor stores to private companies, some state lawmakers have proposed modernizing the state liquor system to make it more customer-friendly with changes such as expanding the number of state liquor stores open for Sunday sales or allowing wine to be ordered online and shipped to customers’ homes.”

After that description, just 37% said they favor full privatization. A majority said they want to modernize stores (26%) or just keep them the same (31%).

The best case for privatization may be the one-time revenue boost the state would get from the sale. Almost everyone has a view on where that money should go. 32% believed the money should go towards local school relief and 26% said that the local property tax burden should be reduced.

The poll also took a look at the hot button issue of guns and gun control. Support for background checks, making high-capacity ammunition magazines illegal, and banning the sale of assault weapons was nearly identical to the February poll’s findings.

Background checks were met with overwhelming support among the poll’s respondents, with 83% strongly in favor of them, 6% somewhat in favor, 2% somewhat opposed, and 7% strongly opposed.

This is very similar to the poll’s findings on banning the sale of assault weapons. 52% strongly support such a ban, while 9% somewhat support it, 10% somewhat oppose, and 27% strongly oppose it.

Questions related to further gun ownership regulation laws were met with much cloudier results, however.

43% of those surveyed, a plurality, strongly favor “creating more laws to regulate gun ownership,” while 14% of respondents somewhat favored the proposition, 11% somewhat opposed, and 30% strongly opposed.

35% of the poll’s respondents identified as gun owners, while 65% did not.

The F&M poll’s findings further suggested a marginal increase in statewide support of marijuana legalization, but the idea was still met with considerable opposition. 38% of respondents support legalization and 54% oppose it. The findings are statistically unchanged from F&M’s February poll.

When the question of marijuana legalization is worded differently, however, the results are drastically different and almost a reverse of the previous findings.

When voters were asked whether or not they supported “allowing adults to legally use marijuana for medical purposes if a doctor recommends it,” 55% are strongly in favor of the idea and 27% somewhat favored it. 3% are somewhat opposed and 13% are in strong opposition.

Civil unions were met with higher support among respondents than an amendment permitting same-sex marriage, however, although the results are nearly identical to last June’s poll.

40% strongly favor civil unions in Pennsylvania, according to the poll, while 25% somewhat favor them, 7% somewhat oppose, and 24% strongly oppose.

The Center for Opinion Research at Franklin & Marshall College polled 526 registered voters from April 30 to May 5 via live interviews to landlines and cell phones. The margin of error is plus or minus 4.3%. 50% of respondents identified as Democrats, 37% identified as Republicans.