For Rob Teplitz, All Signs Point to Obama 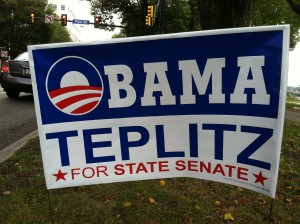 Teplitz is running against Republican John McNally for the seat of retiring Sen. Jeff Piccola (R-Dauphin). It’s one of the four most competitive state Senate races in Pa. this cycle. Teplitz is the Chief Counsel in Jack Wagner’s Auditor General office. McNally, the former Chair of the Dauphin Co. GOP, is a local attorney.

The district includes Harrisburg and its suburbs along with most of Dauphin County, as well as communities in northern York County.

“It’s no wonder Teplitz and Obama share a sign,” said Ray Zaborney, a consultant working for McNally. “They share a philosophy – reckless spending, reckless borrowing, and higher taxes to pay for it.”

He teased Teplitz for concentrating the signs in Harrisburg, where Obama’s performance will be boosted by large support among African Americans, and offered to purchase more for areas like Hershey and York. He also suggested that their legal status is questionable.

“I’ll be happy to pay for more signs for areas outside the City. But I’ll actually make sure it’s paid for through a federal PAC so I don’t violate election law like Teplitz. Some reformer huh?”

The thousands of signs, including the one pictured above, are paid for directly by Teplitz’s campaign committee.

PoliticsPA checked with several campaign finance pros and the Federal Election Commission, and it looks like Teplitz is OK.

State level candidates’ committees are permitted to contribute up to $1,000 to a federal candidate like President Obama, either through a direct contribution or an in-kind contribution in the form of goods or services. Any spending beyond $1,000, and he would have had to form a distinct federal committee.

The Teplitz camp says it’s well below that limit.

Obama’s name is on the plastic part of the sign. The metal wickets – the most expensive part of yard signs – were purchased separately. Additionally, one expert we spoke to said he’d be able to prorate his contribution based on the proportion of the plastic part of the sign that bears Obama’s name. So, if the sign above cost $2 and was split 50/50 Obama/Teplitz, he’d only have to report $1 as a contribution to Obama.

In any case, he said he plans to list the expense as an in-kind contribution when the next campaign finance report is due in October.

“It’s all perfectly legal. It’s an in-kind contribution to the Democratic State Committee and it’s all going to reported along with everything else at the next deadline,” Teplitz said.