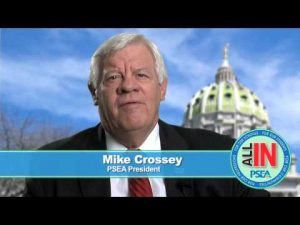 In addition to voting for the Republican health care bill, Crossey believes his Republican representative “doesn’t seem to look at the needs of constituents” according to KDKA’s Jon Delano.

Murphy’s resistance to hold town meetings has led to the start of weekly “Mondays with Murphy” protests at his office attended by disgruntled constituents of Allegheny, Washington and Westmoreland counties.

Crossey finds Murphy’s unwavering loyalty to the Republican Party, ‘Trump-care’, and President Trump increasingly concerning, especially when it comes at the expense of the constituents of the 18th district. Congressman Murphy has a 96 percent voting record with the Republican Party.

Crossey believes Murphy’s support for the Republican health care bill shows his disregard for working people, seniors, those with medical conditions, and the 23 million people that it would leave without health care.

It won’t be an easy road to victory for Democrat Mike Crossey in a district that is majority Democrat, but did elect Republican presidential candidate Donald Trump. It may be a challenge, but Crossey will have the backing of many constituents who have already committed to support whoever challenges Republican incumbent Murphy.

Update: Murphy’s campaign went on the offensive against Crossey, tying him to Minority Leader Nancy Pelosi, and defending Murphy’s work for the district.

“Mike Crossey is a typical Nancy Pelosi liberal, and a wholly owned subsidiary of the tax-and-spend wing of his party. Crossey’s values are well outside the mainstream of the 18th district. Congressman Murphy is proud to stand on his strong record as an independent voice for working families in southwestern Pennsylvania.” Murphy campaign spokesman Mike DeVanney said in an email.