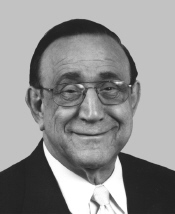 (D-Washington) passed away today at Mon Valley Hospital in Monongahela, PA. He was 81 years old.

Rep. Mascara was viewed as a moderate Democratic, dedicated to his blue-collar constituents. A graduate of California University of Pennsylvania (‘72), Mascara worked as an accountant. He won election as Washington County Controller in 1973 and County Commissioner in 1979, where he served for 15 years before his 1994 election to Congress.

While in Congress, Mascara voted as a pro-life, pro-gun Democrat.

His political involvement didn’t stop there. He served four successful terms in the House of Representatives (1995-2003) before losing his seat to Rep. John Murtha in the aftermath of the 2001 redistricting. After the redrawing of the district lines, Mascara opted to leave the 18th district and run against Murtha in the 12th district, which came to include his hometown of Charleroi and the surrounding areas. He lost to Murtha, and the 18th district was taken over by Rep. Tim Murphy (R).

“My deepest condolences go out to the family and friends of Frank Mascara. While his longtime service to Southwestern Pennsylvania and Washington County in particular will be greatly missed, his legacy as County Controller, Commissioner and Congressman will live on. Frank was the driving force behind developing Southpointe for commercial and business growth. And as leader on local transportation issues, including spearheading the development of the Mon Valley Expressway, Washington County residents know his commitment to the area was deeply rooted in true public service to his constituency. The Mascara family remains in our thoughts and prayers.”

Mascara is survived by his wife, Dolores and three children: Frank, Jon and Karen Talbert.

Visitation will be held from 2 p.m. to 4 p.m. and from 6 p.m. to 8 p.m. Thursday at the Carl J. Spallino Funeral Home in Charleroi. The service will be held at 10 a.m. at the Mary, Mother of Church in Charleroi. Interment will be in Sacred Heart Cemetery in Fallowfield Township.

PoliticsPA will update this story with further reactions as they come in.