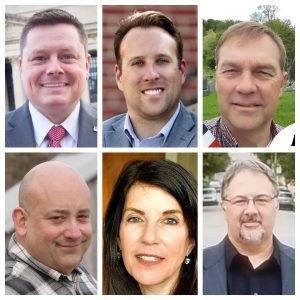 Republicans continue their rise in the west.

A series of traditional Democratic counties in western Pennsylvania, which have been trending red for years, officially flipped to Republican controlled commissioners in four races on Tuesday night.

In Washington County, GOP Vice Chair Diana Irey Vaughan secured a spot on the board for a seventh term and was the highest vote getter with 28% of the vote, but will be joined by Republican committeeman Nick Sherman on the board after his third place finish, besting Democrat Harlan Shober.

In the race for control of the Armstrong County Commissioner, Don Myers, a Republican first time candidate, registered the most votes to land a spot on the board. Incumbent GOP Commissioner Jason Renshaw finished closely behind Myers to earn another term on the board and flip control to the Republican Party.

Republicans celebrated flipping two key races in Greene County by winning control of the commissioners and District Attorney’s office. Mike Belding led the way with 29.6% of the vote, while Betsy Rohanna McClure received 28.5% in the commissioner race, ousting Vice Chair Dave Coder, who only registered 19.2% of the vote. Both GOP candidates outpaced Democratic County Commissioner Chair Blair Zimmerman, who captured 22.5% of the vote. The new county district attorney will be Republican David Russo who garnered 37% of the vote in the competitive three-way race to succeed longtime Democratic DA Marjorie Fox, who decided not to seek another term.

Although this wait wasn’t long, but Republicans also regained control of the Westmoreland Commissioner Board after losing it in 2015. Sean Kertes and Doug Chew, both Republican newcomers, were the top two vote getters in the race, securing a spot on the board. Incumbent Democratic Commissioner Ted Kopas finished in fourth place and will not receive another term, while Gina Cerilli will be the lone Democrat on the board.

While Democrats have long maintained a registration edge in this region and held positions in local elected office, these counties voted for President Donald Trump by wide margins in 2016. Trump captured 73.7% of the vote in Armstrong County over Sec. Hillary Clinton. Trump received 68% of the vote in Greene County, while he pulled in 63.5% of the vote in Westmoreland County. The closest of the bunch for the 2016 presidential election was Washington County where Trump received 60% of the vote and beat Clinton by 25 points.

The shift in the state’s political scene is evident as Republicans pick up seats in western Pennsylvania, while Democrats flipped historically GOP held positions in the Philadelphia suburbs.