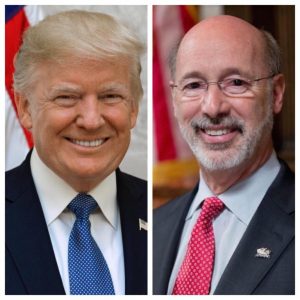 According to a new Fox News poll, conducted under the joint direction of Beacon Research (D) (formerly known as Anderson Robbins Research) and Shaw & Company Research (R), a significant majority of Pennsylvanians approve of Gov. Tom Wolf’s handling of the coronavirus outbreak, while President Donald Trump is in negative territory.

Monday’s protests represent a minority viewpoint. 62% of those polled said that Wolf’s stay-at-home order is about right and 12% said it doesn’t go far enough. 23% said it was too restrictive. 58% polled think that the Trump administration was too slow in its response to the coronavirus outbreak, while 39% said that the administration responded with the appropriate speed.

Former Vice President Joe Biden leads President Donald Trump 50-42 in a poll of Pennsylvania registered voters, while 2% selected other for president, 2% said they wouldn’t vote, and 4% said that they don’t know. Biden’s lead is beyond the margin of error in this poll.

Another troubling set of results in this polling for the president is the marks that Pennsylvanians give him on favorability and job approval rating.

While Biden can’t be graded for job performance, he did boast stronger favorability numbers with 52% saying that they have a favorable view of the former Vice President, while 43% view him unfavorably, and 5% saying that they can’t say.

Although the poll overall provides positive news for Biden, Wolf has the strongest numbers in favorability and job performance. 58% said that they have a favorable view of the governor, while 33% say they have an unfavorable view, 7% that said they can’t say, and 2% who said they never heard of him. The numbers were even slightly higher for Wolf in his job approval rating with 65% saying that they approve of his job performance as governor, while 30% said that they disapprove, and 5% saying that they don’t know.

This overall poll, surveying 803 Pennsylvania voters, collected data between April 18 to April 21, has a margin of error of +/-3.5 percent.

The Real Clear Politics Average shows Biden besting Trump by 4.6 points in Pennsylvania. This poll is tied for Biden’s largest lead over Trump in the state, while the closest results were from a Morning Call/Muhlenberg College poll in mid-February showing Biden and Trump deadlocked at 47-47.