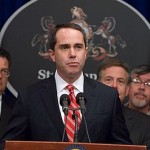 “It is important that people from not only my district but from the whole Commonwealth know as much as possible about this issue,” Santarsiero said as he opened the hearing.

The briefs came from current and former environmental, economic and research representatives, as well as reports from the state’s Department of Environmental Protection, Marcellus 8 Point Plan, Delaware Riverkeeper Network, PennEnvironment, Pa. Budget and Policy Center and The League of Women Voters of Bucks County.

Former Department of Environmental Protection secretary John Hanger opened by recanting his support for 10 of the 96 recommendations.

Hanger, along with the creators of Marcellus 8 Point Plan and Delaware Riverkeeper Network Director Tray Carluccio, agreed that the Governor’s report fails to address the environmental implications that come with natural gas drilling.  Santarsiero reiterated that all Pennsylvanians will be affected by the continuous natural gas drilling, especially if done incorrectly.

Much of the hearings focus centered on Pennsylvania’s use of its own gas and the Pennsylvania impact fee.

Pennsylvania is one of the largest exporters of natural gas in the United States.  In fact, Hanger noted that the Commonwealth “[is] now a net exporter of Natural Gas; we produce more gas here than we use.” He continued by saying, “but we are still importing from Gulf Coast states.”  By using the gas cultivated in Pennsylvania for Pennsylvanians, Hanger believes a reasonable tax can be met.

There were differing feelings toward the impact fee.  Some hearing attendees favored an impact fee based on location, while others favored a flat rate impact fee.  Rep. Santarsiero stressed that although his constituents are not within these zones, the issue is important for all Pennsylvanians.

The Marcellus Shale natural gas drilling was acknowledged by all in attendance as an important aspect of Pennsylvania’s economy, and a resourceful form of job stimulation.  As one of the creators of the Marcellus 8 Point Plan testified: “Any plan that dilutes the effect but gets the goal, I’d be in support of.”

The hearing marked the first legislative committee review of the Governor’s Marcellus Shale Advisory Commission report. The Governor’s recommendations are sure to be closely reviewed by those that would not typically benefit from the state’s changes and regulations.  The overarching goal of the recommendation and review process is to ensure the Commonwealth’s long term prosperity – which hearing attendees unanimously agree will require Pennsylvania to continue being a leading producer of natural gas, while making sure that the burgeoning industry doesn’t disrupt the state’s aesthetic beauty of the lives of its citizens.