Want a preview of Dave Freed’s general election argument? Check out this video. Freed, the Republican candidate for the position of state Attorney General says – without naming his opponent – that his experience as Cumberland County District Attorney sets him apart from Democrat Kathleen Kane. 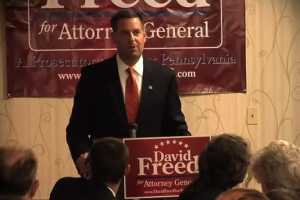 During the three minute and fifty-eight second video, Freed said his adherence to conservative ideals and focus on innovative law enforcement techniques makes him the ideal candidate.

Focusing on his desire to change the objective of Attorney General in the state, Freed said he’d take a proactive approach in fighting crime by preventing crime before it happens.

“I’m the only candidate who’s fought to be tough on crime, but also to be smart on crime,” Freed said. “There aren’t many district attorneys in this commonwealth who have talked about keeping people out of jail, and as you know, I’m a great believer in justice, mercy when it’s appropriate, and being smart on crime.”

Kane was an assistant District Attorney in Lackawanna County for around a decade. Two weeks ago, she overcame former Congressman Patrick Murphy in the Democratic primary. According to an internal poll conducted for her campaign, her win propelled her to a wide early lead in the general election.

Update: The PA Dems are working to tie Freed to Governor Corbett, who, “not only endorsed David Freed but cleared the field for him and donated $25,000 dollars to his campaign,” said party spokesman Mark Nicastre. “Pennsylvania needs an Attorney General who will hold Gov. Corbett accountable, but David Freed is Gov. Corbett’s handpicked candidate. Pennsylvanians cannot not trust David Freed to be an impartial watchdog of the governor.”

Despite his progressive stance on law enforcement, Freed also made it clear in the video that he planned to take an aggressive approach against violent offenders. Freed said he’s the only candidate in the race who has signed pledges to seek the death penalty against first degree murderers prior to trial.

Beyond his approach to law enforcement, Freed also pledged to fight against overreach by the federal government, such as President Barack Obama’s Affordable Healthcare Act.

“Now as Attorney General, I will protect our rights,” Freed said. “I will stand up against unconstitutional federal power grabs like ‘Obamacare,’ like unreasonable EPA regulation. This is the commonwealth of Pennsylvania. This is the home of the Declaration of Independence and the Constitution. We take those rights very seriously, and we’re going to stand up to the federal government.

Freed also promised to fight for the rights of taxpayers, saying he has dealt with limited resources caused by low taxes in Cumberland County and understands how to deal with the increase in burdens.

“We think every day and remember everyday that we are stewards of the taxpayers funds,” Freed said. “As Attorney General, I know that the resources will not increase, but I know to deal with that. I know how to deal with decreased resources and increased problems.”