Elect Dave Freed and he will lock up bad guys. The Republican Attorney General hopeful is on television, and his first spot of the campaign highlights his law and order acumen.

He narrates the entire ad. 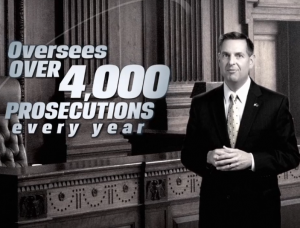 “I’m David Freed. Why should you care that I’ve been a tough, no-nonsense prosecutor for 15 years? Or that I oversee over 4,000 criminal prosecutions every year? That’s I’ve successfully put away drug dealers, child molesters, and murderers,” Freed asks rhetorically.

“Because as Attorney General, I’ll be responsible every day for the safety of your family. And nothing is more important than that.”

He is running against Democrat Kathleen Kane, a 12-year Assistant District Attorney of Lackawanna County. She’s consistently lead in the head-to-head polls since her impressive win in the April primary.

The ad throws a jab at Kane, without saying her name. She boasted in the primary that she was more qualified for the office because she had prosecuted 3,000 cases during her career. By the same measure, as Freed’s commercial notes, Freed prosecutes 4,000 cases each year and has at least 20,000 to his name.

It was produced by Brabender-Cox.

Freed’s ads went up Wednesday – about $500,000 for network TV in most parts of the state and cable TV in the Philadelphia market. That’s on top of $50K+ for a radio buy, according to a Democratic media buyer. Apparently, he’s holding much of his fire for next week, the final week of the campaign.

Kane went up on the air Monday with a similar spot, one she used in the primary as well. She spent over $1 million on ads for the 2nd to last week of the election (in campaign parlance, “week 2”). Her ads are statewide, including network television in Philadelphia.

The second of two outside groups is on the air in this race, too. A super PAC funded by the Democratic Attorneys General Association has an ad up now accusing Freed of pulling punches when it comes to prosecuting political allies, and (inaccurately) refusing to review the investigation of Jerry Sandusky.

The first outside ad came from the Republican State Leadership Committee and (inaccurately) accused Kane of going soft on rapists as a prosecutor.