George Under Fire for LGBT Comments 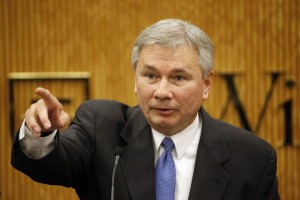 Republican Supreme Court nominee Michael George is under firing for his conduct in a 1988 case and his 1999 explanation of his strategy.

William Bender of the Daily News reports that George sought to defend an Adams County murderer by attempting to shift the focus from the crime onto to the victim’s sexual orientation.

George, who was then a lawyer, acted as the defense attorney for Carr.

A decade later, George was interviewed about the case.

“I wanted to get her full story on the record,” George said in a 1999 book written by Dickinson College political-science professor Harold Pohlman. “That meant a full story as to how many times the women were naked and how many times they engaged in lesbian sex. I wanted the graphic details. All of them.”

“I wanted it to look like these two women were bold with their lesbianism,” he continued. “That they didn’t hide their lesbianism from anybody, including my client. The more sexually reckless the women appeared, the better for Carr.”

The idea was to “put the two women into a poor light” in order to influence the potential jury pool.

“The one thing that I could not get out of my mind was that the local people did not think much of homosexuals,” George explained.

“That’s why we had to get all the steamy facts of what had happened up on South Mountain out before the public. Sort of let what happened simmer in the public’s imagination,” he concluded. “In a way, we wanted to get the local folks talking more about the lesbianism than the murder.”

Vince Galko of the George campaign responded that the candidate “believes the defendant is properly serving a life sentence for this heinous crime,” and told Bender that the candidate is “unable to offer meaningful comment” at this time.

Carr is serving a life sentence in prison for first-degree murder.