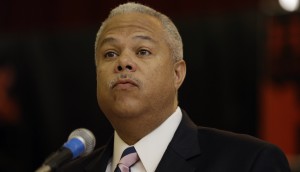 State Senator and former Mayoral candidate Anthony Hardy Williams has begun to talk more about a revelation from his past after previously dodging questions about it during his run for mayor of Philadelphia.

A report from Ryan Briggs and Brian X. McCrone of Philly.com, reveals Williams is claiming to be the victim of a highly sophisticated mortgage scammer. He gave the reporters an interview and talked through the series of events. The State Senator argues that his experience shows that even powerful people can be taken advantage of.

The scam began in 2005, when Williams purchased a home in Atco, Camden County to help a woman on the verge of foreclosure named Darlene Johnson.

Williams said that he was approached by a friend, identified as “Achmed” from West Philly, who told him that he could help Johnson by entering into a “leaseback” or “lease buyback.” This is an example of a transaction that would become emblematic of the mortgage bubble of the 2000s.

The Senator was told that he would buy the almost foreclosed property while Johnson remained in her home, and he would essentially rent the home out to her. The plan was that Johnson would pay rent to Williams until her finances improved to the point where she could buy back the property from Williams.

While Williams first saw this deal as a chance at altruism, he noted that it became, “a nightmare that won’t go away.”

An expert of mortgages, Irv Ackelsberg, stated that these types of deals were “notoriously unstable.”

All in all, the total transaction would be $225,000 with Williams receiving a fee of $22,500. This deal was found to be made by Troy “Alim” Wallace, a Camden barber who knew Johnson through his shop. Although Williams was unaware of this at the time, Wallace had a long history of financial malfeasance and a criminal record. Johnson was to pay Williams $2,150 a month for rent and a $4,300 security deposit. Williams never saw this money.

While Williams did receive the $22,500 fee and paid nothing for Johnson’s house, he stated that he did not enter into the deal for profit.

Within a year of the 2005 purchase, Johnson was no longer making her rent payments and Williams began to receive calls regarding these late payments from the bank. Eventually, he began covering her mortgage payments using the fee he had collected.

In 2007, Williams said he asked a friend to go to the house and check on the property because Johnson would not answer his phone calls. Johnson was not at the house at the time, only her 74-year-old mother was. When the mother called Johnson saying there was a stranger on the property, Johnson called 9-1-1.

While Williams stated that he only had the friend go to check on the property, the Winslow Township police report noted that Williams had sent someone to change the locks when Johnson was not home.

The only way that Williams would legally be able to change locks would be if he were to go through court. He never went to the landlord-tenant court because of the money and how the nature of this arrangement would appear to a judge.

“If she’s a renter, why didn’t I have a key? She never gave me access to the property. At a certain point in time I’m running out of money… and going to court costs money,” Williams said. “I considered selling it, but I wasn’t in a position to sell. She’d have to agree to move.”

When Williams ultimately walked away from the property, the house went up for sheriff’s sale on Sept. 30, 2009 but Johnson would not leave. She filed two court-ordered stays of eviction in 2010 and 2011, and entered a written statement describing herself as a victim of “a mortgage scam.” In this statement she described Williams as “verbally abusive.” Williams has disputed these characterizations.

Eventually she was evicted by the court.