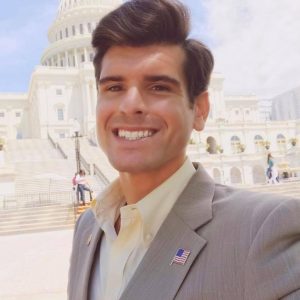 Rep. Scott Perry (R-York) has absorbed a barrage of criticism for his fealty to President Trump. For his new Republican challenger, it’s not enough.

Perry, a member of the conservative House freedom caucus seeking a fifth term in Congress, is being primaried by millennial Republican, Bobby Jeffries, a logistics director for a health and wellness firm for the 10th Congressional District.

In announcing a bid for the seat, Jeffries, 28 years-old, stressed the need for new leadership in Washington D.C. and opposing progressive policies.

“We need fresh faces and boundless energy to show my generation and those behind mine that there are alternatives to being radically progressive,” the release read. “That free markets and personal liberty are worth fighting for, and they are our only pathway to continued prosperity.”

Jeffries bills himself as an ardent supporter of President Donald Trump’s agenda and believes that although he thinks Perry is a “good man” that he is ultimately “ashamed” to stand up for the president when he is “inside the beltway.”

“There is no stronger a supporter of Donald J. Trump than Bobby Jeffries,” the Jeffries campaign said in a statement to PoliticsPA. “Unlike Congressman Perry, I have the energy and courage to fight for President Trump’s agenda. Frankly, I think Congressman Perry is ashamed to stand up for the president when he is inside the beltway. He doesn’t want to offend his special interest and lobbyist pals, it seems like the cocktail parties and receptions are more important to him.”

In addition to saying that Perry is not supporting the Trump administration to the fullest, Jeffries was also critical of the sitting congressman’s accessibility, specifically pointing to Perry’s recent townhall meeting as an example.

“Accessibility is another area where I feel that I can do better than Mr. Perry,” Jeffries said in a statement to PoliticsPA. “It’s hard to understand why a member of congress would rig a townhall meeting.”

Jeffries is accusing Perry of falsely claiming that the late July townhall meeting was sold out in an effort to avoid being face-to-face with constituents. In a Facebook post after the town hall meeting, Perry said that progressive groups were “hijacking” townhall meetings for “political gamesmanship and making a mockery of this Nation’s legislative process day by day.”

On the policy end of his candidacy, Jeffries lauded Trump’s “pro-jobs agenda” and also mentioned “securing our borders,” and supporting Trump to keep guns out of the hands of “the mentally unstable,” while saying that the second amendment is not negotiable. He also said in a statement to PoliticsPA that he believes Trump needs to instruct the FBI to classify ANTIFA as a domestic terrorist group and was critical of Perry for not standing up to “big-tech companies” as he believes they are aiming to “censor millions and attempt to rig elections by shadowbanning and deplatforming many of President Trump’s biggest supporters.”

In a tweet on Aug 2., Jeffries offered words of encouragement for the Congressional bid of Laura Loomer, saying that Trump has “REAL ALLIES” running in 2020. Loomer, who NBC News describes as a “far right activist”, was kicked off of Twitter in November 2018 after criticizing Rep. Ilhan Omar (D-MN) and her Muslim faith. Loomer also made national headlines in 2017 when she was banned from using Uber and Lyft after a series of anti-Muslim tweets.

Although Jeffries announcement did not include support for any progressive positions, he did mention two specific areas in which some in his party may take issue. In an interview with PennLive, Jeffries said he supports full equal rights for gays and lesbians and believes that Congress does need to address the student debt crisis, while not supporting some Democrats plans for free college.

On the Democratic side, Auditor General Eugene DePasquale, who narrowly edged out GOP AG candidate John Brown in the newly drawn district boundaries, announced a bid for the seat in recent months, while Tom Brier, an attorney and author, announced his candidacy in April.

The Cook Political Report recently changed the rating of the 10th District from Lean Republican to Toss-Up.

The Perry campaign did not immediately respond to comment.