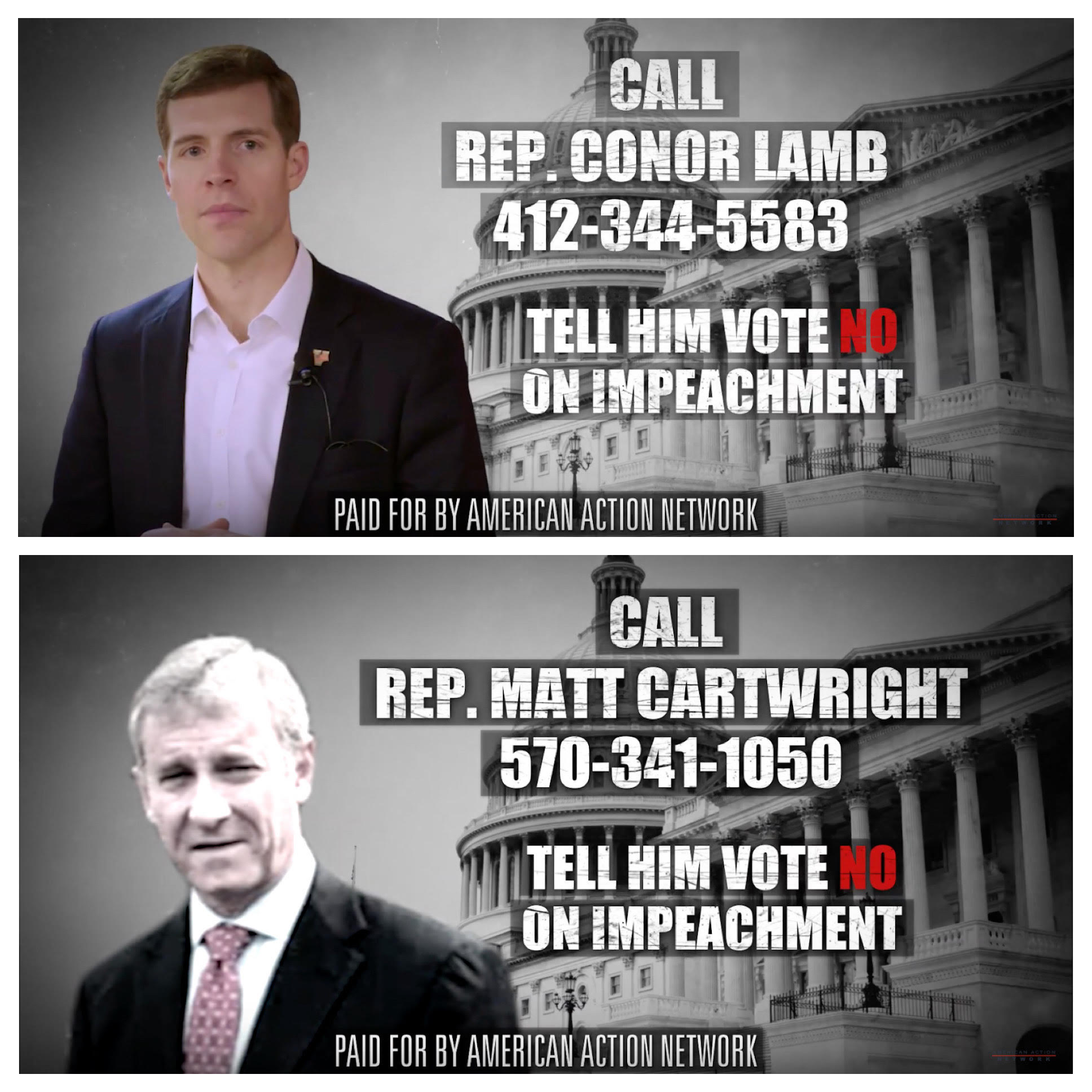 The largest anti-impeachment campaign to date has hit the Pennsylvania airwaves.

The group has pledged to spend $300,000 on television and digital ads targeting Cartwright and Lamb, attempting to link both Democratic congressmen to the impeachment effort, calling the investigation a “politically motivated charade.”

“This is about preventing a potentially disastrous outcome from occurring next year,” said Rep. Alexandria Ocasio-Cortez (D-NY), at the beginning of the television ad.

The ad continues to say that both congressmen, who voted for the impeachment inquiry, are not focused on border security, healthcare, and passing Trump’s proposed USMCA trade pact.

The ad ends with urging residents to call the offices of both representatives and tell them to vote “no” on impeachment and “get to work.”

Politico reports that the overall ad campaign, which is $7 million in 37 Congressional Districts, is the “most expansive, coordinated ad campaign on impeachment to date.” A spokesperson for American Action Network told PoliticsPA that the ads, which started airing on Monday, will extend into the first week of December, although it is expected to extend past that.

Both the Cartwright and Lamb campaign fired back saying that they are focused on issues important to their district.

“This dark money group has spent a fortune lying about Conor Lamb for the past two years, so this is nothing new,” said Lamb Campaign Manager, Abby Nassif Murphy. “People in western Pennsylvania know nonsense when they hear it.”

Although Cartwright and Lamb voted for the impeachment inquiry, neither has indicated their intention for the final vote.

While the American Action Network is hitting Cartwright and Lamb on the vote, they’ve also pledged support in the form of digital ads for Fitzpatrick and Perry.

The group is using digital ads in 7 districts around the country, with two of them being in Pennsylvania, thanking them for “standing against impeachment.” 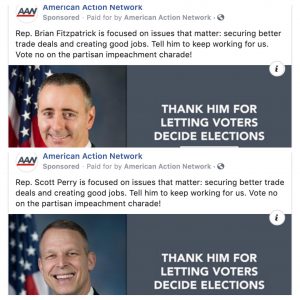 A spokesperson for the group tells PoliticsPA that they are spending $100,000 for Fitzpatrick and $50,000 for Perry’s district.

Cartwright and Lamb both represent boundaries that Trump carried in 2016.

Trump won Cartwright’s district by close to 10 points in 2016. Cartwright bested Republican Matt Connolly by a 7.6 point margin in 2016 and won by a slightly larger margin in 2018 by taking down GOP candidate John Chrin by just over 9 points.

Trump narrowly edged out Clinton in Lamb’s district in 2016. Lamb won his first race in March 2018 in the old 18th Congressional district by about .5 points in boundaries that went to Trump by a wide margin, while he coasted to a double digit victory in Nov. 2018 in the 17th Congressional District over Rep. Keith Rothfus (R-Allegheny) by 12.5 points.

Cartwright, Lamb and Susan Wild (D-Lehigh), have been targeted by the NRCC as seats to flip in 2020.