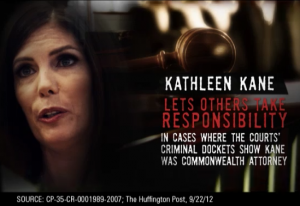 After saying on Friday that it would edit a controversial ad, a Republican group has finally withdrawn a spot criticizing Attorney General hopeful Kathleen Kane. The organization removed two references to cases prosecuted during Kane’s tenure after Kane’s campaign successfully pushed back against the claim.

The Republican State Leadership Committee based in Washington D.C. is spending over $500,000 to air the ad in the Philadelphia media market – where it will be viewed by far more people than the number who hear Kane’s push back.

The original version of the ad accused, “Of Kane’s few cases, a judge rejected a weak plea deal she made because of the brutality of the crime and age of the victim.”

But the father of the victim in that case rebuked the ad Friday, saying Kane was not involved with the plea deal. One of Kane’s fellow Assistant District Attorneys in Lackawanna County, Gene Talerico, also said the claim was false. He said Kane’s name was on an early court filing in the case in a preliminary, administrative function and not pertaining to the plea deal.

The new version quixotically blasts Kane for pushing back against the RSLC’s false claim about that case.

“Now, she lets others take responsibility for violent criminals given weak plea deals,” the ad’s announcer accuses, citing a news story about Kane’s campaign fact check on the first version of their ad.

A spokesman for the RSLC said Friday that the group would remove its initial ad. However, they delayed releasing the newer version until Monday afternoon because it expected another of the ad’s claims to be refuted as well. That turned out to be the case.

A second accusation of the initial ad – that Kane had “gone soft” while prosecuting a rapist – was also removed from the RSLC’s ad after it was refuted. The Kane campaign distributed a letter from Lackawanna County District Attorney Andrew Jarbola.

He said in part, “As District Attorney at the time this case was prosecuted, I can confirm that Kathleen Granahan Kane had no role in the prosecution of Commonwealth v. Roberts. She had no involvement in the case, including the guilty plea or sentencing, which were handled by other prosecutors in the District Attorney’s Office.”

In the second version of the ad, the RSLC debuts a new claim.

“And in one of her only trials, Kane failed miserably, resulting in an alleged rapist of a 15 year-old getting off with a conviction on lesser charges,” the announcer says.

The Kane campaign said it would comment after having the opportunity to review the fresh attack.

Update: Chris Brennan has the skinny on the third case:

Kane on Friday said she recalled that case, which the RSLC listed on its web site before adding it to the commercial Monday.  She said it was unfair for the RSLC to suggest that she went light on the defendant in that case.

Other elements of the ad – including an accusation that Kane had exaggerated her courtroom experience along with imagery of a teenage girl being abducted – remained the same.

In the meantime, as the RSLC delayed releasing its newer ad, Democrats went on a full court press to have the ad suspended from Philadelphia-area television networks, and indeed succeeded in getting the spot off of CBS3 – according to a Democratic consultant familiar with the media buy.

Pa. Democratic Party Chairman Jim Burn sought to lay the ad at the feet of the Republican candidate in the AG race, Cumberland County District Attorney Dave Freed. His campaign declined to comment on the ad for several days until Sunday, when a spokesman called for ethical tactics on all sides – but did not reference the RSLC or the ad itself.

“Tell your out of state friends to immediately take down their admittedly false and vicious TV attack ads against Kathleen Kane,” Burn said to Freed, before the group switched out its at at 4pm Monday.  “David Freed’s inaction right now speaks volumes as to what kind of Attorney General’s Office he would run in our state if his campaign for Pennsylvania’s top law enforcement job doesn’t even care about the truth.”