GOP Hits Back at Kane After Sandusky Report 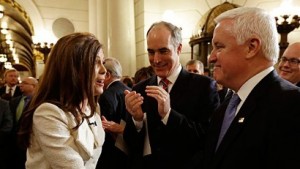 Kane’s report about the Sandusky investigation, which was released earlier this week, states that they “found no direct evidence that electoral politics influenced any important decision made in the investigation.”

Pennsylvania Republican Chairman Rob Gleason released the following statement after the report was made public:

“Today’s report confirms that Kathleen Kane used a terrible and horrific tragedy to smear Tom Corbett and professional prosecutors to advance her own political ambitions. Throughout the course of her political campaign, Kathleen Kane made baseless accusations against the character of Governor Tom Corbett and the Attorney General’s Office. Now, she is trying to desperately spin her way out of the fact that the Sandusky investigation was conducted in a proper manner that led to the successful conviction of a child predator.”

“There is a difference between asking tough questions and recklessly pursuing political gain,” he continued. “Kathleen Kane’s conduct from the time she started her campaign has been wrought by desperate mudslinging and false innuendo which has damaged the Office of the Attorney General.  Pennsylvanians are taking a hard look at Kathleen Kane’s actions and she needs to be held accountable.”

An editorial touted by the state GOP and published by the Bucks County Courier Times further chastises Kane for not apologizing to Corbett for damaging his reputation.

“Pennsylvania Attorney General Kathleen Kane owes Gov. Corbett an apology, as well as some of the other folks who preceded her in the Attorney General’s Office,” the editorial asserts.

Kane also claimed during the press conference that two children were abused by Sandusky as Gov. Corbett’s investigation was underway in 2009. Initially, she said that Sandusky was not charged with assaulting either of the two victims. Later, she changed her statement, saying that one of the victims did appear in court and testified against Sandusky.

However, this claim has been disputed by Pennsylvania State Police Commissioner Frank Noonan, who led the unit that investigated Sandusky. He spoke with his fellow investigators about Kane’s assertion that two children were assaulted after the start of the investigation in 2009.

While an apology may not be forthcoming from the Attorney General, her report asks just as many questions as it answered. Far from closing the book on the Jerry Sandusky tragedy, Kane appears to have only extended this already lengthy controversy.