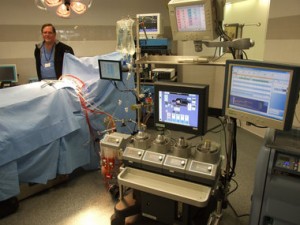 House Republicans were joined Thursday by three-dozen Democrats to repeal part of Obama’s health care law – a tax on medical devices. The GOP has launched a full court press, saying bipartisan opposition to the tax illustrates the illegitimacy of all of Obamacare. President Obama has threatened to veto the repeal.

Republican candidates and committees, including Mitt Romney, the RNC, the PAGOP, Tom Smith for Senate, every GOP member of the PA delegation and most candidates have lined up to blast the impending tax.

“The ill-considered medical device tax is only one of many fatal flaws in Obamacare. As president, I will work from my first day in office to dismantle Barack Obama’s federal health-care takeover and replace it with real reform that strengthens our health care system and puts patients first,” Romney said.

“Today’s vote in the House represents a step in the right direction toward repealing the overreaching Obama-Casey health care takeover that has only grown our nearly $15.7 trillion debt and raised the price health insurance on Pennsylvania families,” echoed Smith.

One of their strongest backers is Rep. Jason Altmire (D-Allegheny), who has vocally opposed the tax. He was one of the 37 House Democrats who voted for its repeal. Reps. Tim Holden and Mark Critz also voted to repeal the tax. Critz defeated Altmire in the primary and has taken lumps from Republican opponent Keith Rothfus for votes to leave Obamacare intact. All other members of the PA delegation voted along party lines.

One day after Altmire co-authored an op-ed with Rep. Erik Paulsen (R-Minn.) to warn against the danger of a medical device tax (read op-ed here) a tax repeal bill passed with bipartisan support in the House. As part of the Patient Protection and Affordable Care Act, aka Obamacare, a 2.3 percent tax is set to be levied on the revenues (not profits) of medical device companies in January. Republicans are now trying to spin the bipartisan effort as evidence of an innate flaw in Obamacare.

President Obama has threatened to veto the repeal bill and released the following statement: “This excise tax is one of several designed so that industries that gain from the coverage expansion will help offset the cost of that expansion…. H.R. 436 would fund tax breaks for industry by raising taxes on middle-class and low-income families.”

Altmire, Paulsen and fellow politicians believe that medical device companies in innovation-hot states like Pennsylvania, New York, Minnesota, California, and Massachusetts would have floundered under the burden of the $28 billion tax. They fear that the tax would have forced medical device production and innovation overseas helped garner 239 bipartisan cosponsors for the repeal bill, which passed 270-146 on Thursday. According to an industry-commissioned study conducted by a group called AdvaMed, the tax would result in the loss of 43,000 U.S. jobs and cost the medical device industry $6.7 billion (out of $116 billion) in revenue annually.

“We have an opportunity to vote for innovation and jobs — and ensure that the next great medical breakthrough is developed here in the U.S., not imported from abroad” Altmire and Paulsen wrote in their op-ed (watch video of Altmire speaking about the repeal).

The accuracy of the AdvaMed study has been put into question, however, and an article published by Bloomberg Business Week. The report says that the assumptions made by AdvaMed are exaggerated, ill-supported, and thus inaccurate. He writes that the findings “conflict with economic research, overstate companies’ incentives to move jobs offshore, and ignore the positive effect of new demand [for medical supplies by newly insured Americans] created by the law.”

To address another of Altmire and Paulsen’s central concerns about the tax, the overseas exportation of American jobs, Flavelle writes “[U]nder the new law, the tax will apply to all covered products—dialysis machines, pacemakers, heart monitors, and the like—sold in the U.S., regardless of where they are manufactured. Devices made in the U.S. for export are exempted from the tax. That means U.S. companies selling domestically have no new incentive to move production outside the country.”

But Republicans continue to push hard against the “Bedpan tax,” as Rep. Charlie Dent has called it. The Republican National Committee organized interviews with Chris Molineaux, the president of Pennsylvania BIO. He says the industry is directly responsible for 80,000 PA jobs and indirectly for another 400,000 service industry jobs including lawyers, landscapers and everything in between.

“There’s a multiplier effect of about 5.2, which means that roughly 480,000 jobs in Pennsylvania are either directly or indirectly tied to the life sciences…. There are about 22,000 people in Pennsylvania who work directly for the medical device companies,” Molineaux said.

Molineaux added that the  2.3 percent tax on medical device company revenue would be especially burdensome to the many small, start-up companies in Pennsylvania which have yet to turn a profit.

“Company leaders will have to decide, where is the money coming from. They’ll have two choices. They can either stop hiring and eliminate existing jobs, or stop investing in research and development.”