GOP Leadership Call on Ellis To Resign After Assault Allegation 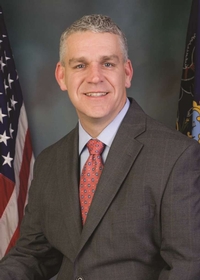 The calls for state Rep. Brian Ellis (R-Butler) to resign are growing.

Last Thursday, the Philadelphia Inquirer reported that Ellis is under criminal investigation into allegations that he had sex with a woman while she was “incapacitated and without her consent, according to multiple sources with knowledge of the inquiry.”

The alleged assault had taken place in late 2015 in his Harrisburg residence and the Dauphin County District Attorney’s Office has opened the criminal investigation.

Gov. Tom Wolf and GOP leadership have called on Ellis to resign amid these allegations.

“The allegations against Representative Ellis are outrageous and unacceptable,” said J.J. Abbott, a Wolf spokesman to PennLive. “We stand with the survivor whose decision to come forward and seek justice is courageous. Governor Wolf believes Rep. Ellis should resign.”

In a statement on Friday, the House GOP leadership stated that they have “zero tolerance for any instance of sexual violence or harassment” and suspended his chairmanship of the Consumer Affairs Committee and will not assign him to any other committees as well.

“House Republican leaders are recommending Rep. Brian Ellis resign from office to take care of his family and address the allegations raised against him that are currently the subject of a criminal investigation by the Dauphin County District Attorney,” the press release states. “The House Republican Caucus has zero tolerance for any instance of sexual violence or harassment.”

Al Lindsay, the chairman of the Butler County Republican Committee, told WTAE that he’s “surprised” at the way the House Republican leaders are dealing with the allegations and believes Ellis should not resign yet.

“I am surprised at the reaction of the state Republican leaders. For Heaven’s sake, he hasn’t even been charged with anything,” Lindsay said to WTAE. “I’m of the opinion that we shouldn’t demand someone’s resignation until we know whether they’re going to be convicted, whether they’re going to plead guilty, or something of that nature. Here the gentleman hasn’t even been charged, and they’re already screaming for his head. I think it’s very premature. I’m a little surprised. I don’t know their reasons, you see. There may be more to this than I know.”

Ellis’ office did not respond to comment from PoliticsPA.