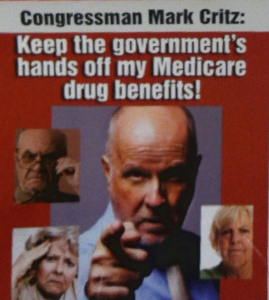 A mailer from a group that boosts GOP congressional candidates arrived today at the homes of seniors in the 12th district. Mark Critz’s campaign called the mail piece an attack, and said that it violates the unspoken ceasefire for campaigns on the anniversary of September 11th.

A spokesman for the group says that it’s an issue advocacy mailer, and its timing was inadvertent.

The piece doesn’t criticize Critz directly, instead urging voters to tell to oppose H.R. 2190. The bill would compel pharmaceutical companies to offer rebates on medicines for lower income Medicare Part D recipients. It’s essentially a no-chance, go-nowhere bill. It was referred committee in June of 2011, has little chance of passing, and Critz says he opposes the bill.

But the mailer does say, in bright red and white lettering, “Tell Politicians: NO Hidden Medicare Drug TAX!” and, with irony that is likely unintended, “Congressman Mark Critz: Keep the Government’s hands off my Medicare drug benefits!”

Since most people only glance at political mail pieces, visuals matter. And that’s why Critz’s camp calls it an attack.

YG Network is the 501(c)(4) group that sent the mailer. Its affiliated super PAC, the YG Action Fund, aims to assist Republican “Young Guns” – the name given by the National Republican Congressional Campaign Committee to its top tier challengers. Critz occupies one of the group’s 30 targeted seats and the only one in Pennsylvania.

Critz spokesman Mike Mikus criticized the piece and sought to connect it to Critz’s opponent.

“It is disappointing but not surprising that Keith Rothfus and his allies couldn’t take one day off of false, negative campaigning to honor those who perished on 9/11,” said Mikus. “Today is a day that symbolizes a national tragedy and the coming together of all Americans in unity. Unfortunately, Keith Rothfus and his allies obviously do not agree.”

The Flight 93 crash site lies just a few miles outside the 12th district.

Rothfus is an attorney from Allegheny County. By law, neither he nor his campaign coordinated with YG Network or had anything to do with the mail piece.

Both his campaign as well as Critz’s, and most if not all of the third party groups on TV in the district, suspended their ads for the day. Typically, experienced campaign media consultants instruct broadcasters not to play ads on politically sensitive days such as 9/11.

Mail is a bit trickier to plan. Though it’s possible to include specific instructions on the date of delivery of political mail, that requires a great deal of coordination between designers, printers, and the post office. It didn’t happen in this case.

YG Network spokesman Brad Dayspring said the delivery day was accidental, and dismissed the suggestion that it was timed to coincide with 9/11.

“September 11th is a day of remembrance, prayer, a mourning and one where all Americans should take time to reflect on how blessed that we are,” he said. “The issue advocacy mail piece was sent last week and from there was unfortunately in the hands of the U.S. Postal service. The victims and their friends and families have enough on their minds without having to deal with further consternation.”

Here’s a copy of the mailer, provided by the Critz campaign: